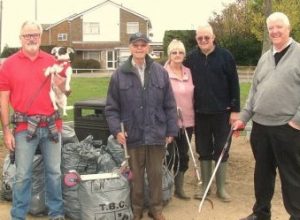 BICKERING councillors have clashed via social media over the possible closure of Heath Road, a busy link between Chadwell St Mary and Grays.

Proposals aired by Highways England in relation to how the planned Lower Thames crossing route will pass through Chadwell show what appears to be the end of Heath Road sealed off, just before the point where it currently links with the A1013 (Stanford Road).

One ward councillor Russell Cherry has published an email from Thurrock Council engineering technician Jeanette Kelly telling him there are no plans to close Heath Road to through traffic, but fellow ward councillor Gerard Rice has rebuked him and called on him to follow local events more closely – saying “it is not a game”.

Independent group member Cllr Cherry says he wanted information to “scotch” rumors and he has further quizzed the council, asking: “Is there to be this closure or does ‘currently’ mean not in the immediate future?

“I believe there should be more honesty on this subject as I cannot tell people who ask me, their ward councillor, about this subject that Heath Road will not be closed.”

Labour’s Cllr Rice, who is also vice-chairman of the Lower Thames Crossing Task Group, appears to have taken use of the word ‘honesty’ as an attack on him and has publicly rebuked Cllr Cherry, saying: “Why do you not speak to the Chair Cllr Peter Smith or you should make time to attend some meetings? You would be better informed.

“Remember we are all Thurrock councillors trying to protect Thurrock from Highways England and their plans to destroy the countryside in Thurrock and destroy the environment we all live in.

“This not a game and why are you making this a political issue?”

Cllr Rice has published comments from Ian Kennard, Highways England’s Stakeholder Engagement Manager and Thurrock Lead, which says: “There are many aspects of our design that are yet to be finalised and are currently being considered in preparation for our statutory consultation later in the year.

“ The needs of local communities is important to us when considering our proposals. We have recognised the importance of Heath Road to the residents of Orsett Heath and Chadwell St Mary and we are currently reviewing a number of options in terms of access.

“As part of our ongoing discussions with your officers we will be reviewing our proposals for local access not only for Heath Road but for the entire route within Thurrock.

“I hope that I have been able to reassure you that no final decision has been made and that we are aware of the importance of Heath Road to the local communities.”