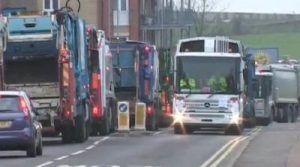 UNITE members working in Thurrock Council’s waste collection service have agreed to end the current threat of strike action; but tensions remain in the service and the threat of strikes could be revisited if the council reneges on its promises, Unite warned today.

Following the decision to suspend the initial strike action (on April 6) Thurrock Council has now made a series of concessions in writing. As a result Unite’s members have agreed to call off their remaining planned strikes.

The council has confirmed:

Pictures from the new ‘big brother’ style cameras with live streaming to be fitted on Thurrock’s refuse vehicles can’t be viewed by managers at their desks and phones and will only be normally viewed by the council’s data protection officer. Any requests to view the footage will have to be in writing and that information will be shared with Unite

There will be no cuts to the rounds

Problems surrounding payments for Saturday working have been resolved

The council will take action to resolve issues of union discrimination and the lack of facility time.

“However Thurrock council must understand that there are major tensions remaining in its refuse service and if it reneges on its agreement in any way we will re-ballot for strike action.

“Recent council communications that suggest this has all been a misunderstanding and ignores the major concessions that have been made, are extremely unhelpful, inaccurate and further erode workplace harmony.

“To ensure that there is no further threat of bin strikes it is imperative that the council’s written agreement is abided by and that every effort is made to restore confidence among the workforce.”

A Thurrock Council spokesperson said: “The council is pleased that the meetings it has held with Unite over the past months has enabled the union to clarify its misunderstandings of the issues raised as concerns.

“The council has been consistent in its position throughout the negotiations and we are pleased that residents will no longer face any disruptions to a service as important as waste collection”.