Arena Essex: Alfie shows what it is all about

TEEN sensation Alfie Jones won a sensational Stock Car final on Sunday at Arena Essex, after a great duel with fellow Ministox graduate, Aaron Totham and a couple of drivers with a great many years experience behind them, Lee Madden and Benfleet’s Vic Bilkey Jnr. 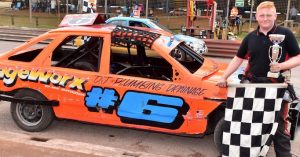 It had already been a day of highs and lows for Totham, who had won the first heat but suffered a big crash in the second. Having just made the final grid with seconds to spare it looked like he was on the way to victory until Jones closed with a couple of laps to go. The two fought over the place and their battling allowed Madden to pass them both on the last lap, but Madden went too deep into the final bend trying to prevent contact from Jones and this took Totham wide too, allowing Jones to nip through to the flag ahead of Madden, whilst Bilkey was able to pip Totham to the final podium place.

The Lightning Rods started the day a car down with Chris Reeve suffering a stuck throttle in practice which resulted in a massive impact with the barrier and a written off car.

Kiereen Thomas won the first heat, but it went downhill from there for the Dartford racer with non finishes afflicting both later races. Orsett’s Mark Collins dominated from that point on with the Reeve families day going from bad to… well not quite as bad… with a clash between Connor and Marcus, thankfully only being delaying rather than damaging.

Three dramatic Stock Rod races were characterised by Joe Simmons controlling the pace from the front, keeping the inside line and inviting the rest of the pack to try the risky outside. They certainly tried very hard indeed with Matt Rowling taking the fight to Simmonds with a great pass after many laps of side by side action in heat one. Heat two saw Simmonds hang on for the win, with John Dunn in his wheeltracks for pretty much the whole distance and Jon Turvey and Matt Rowling again bravely clinging onto the outside.

The final was an exceptional race with Dunn once again in the wheeltracks of Simmonds, but several drivers were making good progress around the outside. Jon Turvey ran alongside Simmonds for many laps with Matt Rowling on his tail also looking for a gap. Rowling made a tactical error by pulling back in line behind Simmonds, just at the point that Turvey finally made the pass stick. This propelled Jody Hawkins alongside Simmonds and she too got past, Jordan Morgan following suit before Rowling regrouped and completed his own pass of Simmonds.

The PRI Bangers were in good numbers and lively pair of heats went the way of Paul Miller and Jack Coveney. Alfie Cornish won the consolation race before Jamie Webb added another win to his tally in the final. Stanford Le Hope’s pairing of Joe and Dwain Powers had a rough afternoon, both falling victim to hits not strictly within the rules of the PRI Bangers. The Destruction Derby was the most entertaining event of the day with Mike Caton attacking Ricky Smith only to get a big hit from Jamie Harding. Caton continued in his badly warped car to attack Dave Daws, only to get further trashed by Anthony Baldwinson. Micky Cornish destroyed Baldwinson before finishing off Tommy Harding with a big hit and finally silencing Luke Hardy with a well aimed hit on his front wheel.

The next action at Arena Essex is on 29th April when the National Micro Bangers return for round 2 of their World Series. Expect big action from small cars! The Stock Rods, Lightning Rods and Mini Stox provide support.