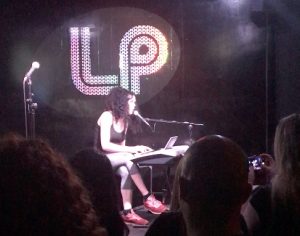 People Change:
Jordan Gray at The Curtain in Shoreditch.
Wednesday May 2nd

ELEVEN years ago, this reporter went down to Byron Gardens in Tilbury to interview a young singer-songwriter called Jordan Gray. On that day, we thought he was an incredible talent. Eleven years later, she still is.

Jordan Gray has always been a performer but now the core of her performance is comedy. The piano is still there and his music is now a wonderful part of her act as opposed to “the act”.

People Change is the show Jordan is planning to take to the Edinburgh Festival in August. This will be her first full on three week stint at the biggest arts festival in the world. No pressure then!

The show is a one hour journey (as she has appeared in ten reality TV programmes we can use the J word) from performing in a Goth band at the Orsett Cock pub (yes that really was the name of his mum’s pub) to where she is in 2018.

Jordan will bring inevitable comparisons to Russell Brand as a lot of her stylising and intonation is similar and Jordan refers to that in the show but that is hardly surprising as Russell Brand is from a similar stomping ground in Grays. We like to think that Jordan’s act has a number of influences including another Thurrock artist, Scroobius Pip, who was in the audience. Then again, so was her plastic surgeon, who has also helped shape Jordan’s career.

The bottom line (and there are a lot of bottom lines) was that Jordan was funny, clever, engaging, outragoeus, confident, thought-provoking and entertaining. From the clever word-play all the way to a fantastic final song that received a standing ovation. If we are being a little vague in this review it is because we want people to go and see Jordan in Edinburgh. The price of the admission is worth it, just for the finale alone.

Yes there are rough edges but we really do think Jordan has now found the niche that she can carve out for a long long time.

In 2007, Jordan played Hallelujah in his bedroom studio. In 2018, she played it “Sing along to the word” at the Curtain Hotel in Shoreditch. Her career has been a joy so far and long may it change and prosper.