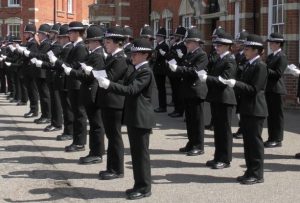 FORTY-six new recruits proudly ‘passed out’ this afternoon (Friday, May 4) during a special ceremony at our HQ in Chelmsford. They were welcomed into the force by Chief Constable Stephen Kavanagh, Police, Fire and Crime Commissioner for Essex Roger Hirst and High Sheriff for Essex Bryan Burrough.

The officers, split into Intake D1 and Intake D2, have been put through their paces over the last 18 weeks as they trained to become Police Constables. After pledging their commitment to serve the residents of Essex, they were welcomed to the force in front of their loved ones.

Mr Kavanagh thanked the officers for all of their hard work during their training and wished them well in their future as PCs.

He said: “You are joining a remarkable organisation. On this ground, generations of new Essex Police officers have taken their first steps into new careers and have protected and served this county.

“Our family in Essex Police spans generations and at passing out parades through the years, my predecessors as Chief Constables have seen these new generations go out on their way. If they were anything like me, they will both cherish and be humbled by the energy, decency and commitment that stands in front of you.”

During their training course to become Police Constables, the students collectively raised almost £6,400 for charity. Students in Intake D1 raised £2050 for Bereavement in Maternity at Broomfield Hospital after completing a London to Paris static bike ride at the High Chelmer Shopping Centre in Chelmsford as well as holding cake sales and charity tuck shops.

Students in Intake D2 raised £4328 for St Helena Hospice after completing a 10km charity run dressed as cops and robbers as well as holding cake sales and charity tuck shops. Cheques were presented by each intake to representatives from the charities during the ceremony.

The event also saw the Kirste Snellgrove student officer award being presented to PC Harriet Dodd for demonstrating the core values expected of a Police Constable.

The award was created in 2012 in honour of training Sergeant Snellgrove, who sadly died following a long fight against cancer.

During her 22 years’ service with Essex Police, she had displayed the key values expected of every Essex Police officer and loved her role of serving the public.