ESSEX Police are conducting enquiries into the burglary of a post office in Peartree Close, South Ockendon.

A spokesperson said “We were called at around 1.30am this morning, May 5, with reports that a vehicle believed to be a silver Land Rover had been seen to reverse into the shop.

“Three men wearing masks and white crash helmets, were then reported to have removed a cash machine, and put it into a black Audi.

“A search of the area was carried out, as the vehicles were seen to leave in the direction of the A127

“No arrests have been made and nobody was injured during the incident.

“The cash machine has not been recovered and was believed to contain in the region of a five figure sum.

“Officers remain on scene and we would encourage anyone with information who may not have yet come forward, to call Grays CID on 101, or Crimestoppers anonymously on 0800 555 111.

ESSEX Police are in attendance outside a shop in South Ockendon.

There appears to be massive damage to the front of Pear Tree Convenience store on North Road. 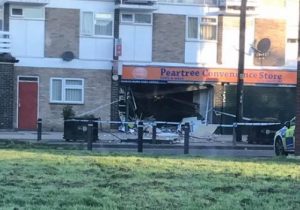