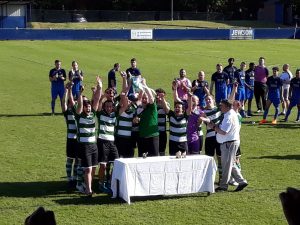 Catholic United raise the Anagram Records Trophy – could they land a treble by the end of the season? (Photo by Essex Olympian League @ eofl)

Catholic United picked up their first trophy of the season as they lifted the Anagram Records Trophy after a 2-0 win over Broadfields. Harley Kee opened the scoring in the first half with a sublime free kick and Brad Williams then added a second in the 60th minute to secure the victory.  It could be the start of a memorial week for Catholic United as they have an Essex Premier Cup Final appearance on Monday and could have the Premier Division title in the bag by next Saturday.

Buckhurst Hill are the Division One champions after they beat FC Hamlets 5-3. Sonny Shilling laid the charge with a hat-trick with Eren Muti and Fehinti Falola also chipping in. FC Hamlets replied via Ishmael Carter, Charlie Heatly and Darren Serrano-Griffiths. Great Baddow may not now be able to land the title but their 5-2 win at Great Baddow keeps their promotion hopes very much alive. Ryan Baxter, Matt Crick, Luke Perry, Jack Mead and Ollie Evans supplied the Great Baddow goals but they are being chased for the final promotion place by Hutton who won their game against Snaresbrook 5-0 with Dan Carpenter’s brace being added to by Robert Lorkins, Keelan O’Donovan and George Nash. Hutton have two games left to play, whereas Great Baddow have one game left but have a three point advantage. It could go down to Goal Difference which at the moment is in Hutton’s favour.  Galleywood’s excellent end of season form continued on Saturday as they registered a 2-0 win at Old Southendian with Jack Chatterway and Matthew Buckingham providing the goals. The win means they have only lost once, which was to leaders Buckhurst Hill, in their last eleven games which has helped them dispel any relegation fears and guarantee their Division One status. A Conor Maher hat-trick plus a Ryan Bussy header helped Sungate beat Shenfield AFC 4-2. James Bigmore and Ben Absolon scored the Shenfield replies.

Louis Elwood notched the Upminster goal but they remain embroiled in a relegation battle with Rochford Town after they were gunned down by a Dillon Southgate brace that saw Rayleigh Town Res. bag the points with a 2-1 win. Only goal difference separates Rochford Town and Upminster and they both have one game left to secure their Division Two status. Benfleet closed their season with a 1-1 draw at Newham United. Oli Hunter scored their goal with Akeem Yinka scoring for the hosts.

Samuel Winney bagged a double for Beacon Hill Rovers who went on to score another goal via Ren Bearman to give them a 3-2 win over Leigh Town. Gbavalena Waiwaiku scored both the Leigh goals.