Reflections on the Thurrock Elections 2018

Now that the dust has settled, we thought we would reflect on the Thurrock Borough Council Elections of 2018. 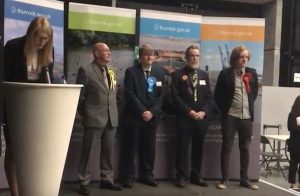 The Thurrock Conservatives will be delighted to have twenty seats out of forty-nine. Whether they continue to run the council will be decided at the annual council on May 23rd.

They could really dig in now in the east of the borough. There is plenty to suggest that they could have three councillors in SECT, two in Stanford East and three in The Homesteads, although if rumours of the possible Labour candidate in Stanford West are true then it could make for an interesting battle.

Encouraging to see a nineteen-year-old in Alex Anderson get involved and win in SECT.

Stifford Clays is a great coup. New Conservative councillor Lizzie Rigby is a local vet and will be used to cat fights, parroting and making sure they all have a shiny coat.

They may want to reflect on why they lost Ockendon. We would give Brandon Groves resident David Van Day a chance after all the hard work he put in up in Aveley.

The same applies in South Chafford. We wonder if Tunde Ojetola will be back. Didn’t see much visible support from the other three Chafford councillors.

Many wondered why they made so much effort in Aveley and (seemingly) less effort in Ockendon and South Chafford. By all accounts, the Thurrock Independents (TI) were deeply unhappy regarding aspects of the Conservative campaign in Aveley, which may be a subject we return to on May 30th at the annual council.

We will wait until annual council when we will look to the challenges and plans for Thurrock Council in the coming year. The issue of 32,000 homes might just be a matter of discussion.

As we have reported, Labour are delighted to have gained three seats and become the second party in the chamber with seventeen seats.

It marks a successful first campaign as leader for Cllr Oliver Gerrish, whose strategic approach has paid dividends.

Taking South Chafford was a coup. Much of it must go down to the tenacity of Abbie Akinbohun. Some may scoff at the standing for hours by the side of the road in Chafford. Our sister paper, YourHarlow has seen that tactic used by the immensely popular Conservative MP, Robert Halfon since 2001.

Oliver Gerrish will be pleased to have talented councillors such as Lynn Worrall, Mike Fletcher and Qaisar Abbas.

Labour will also be pleased to have seen off the opposition in West Thurrock, Grays and Tilbury. They will hope to take another seat in Tilbury St Chads in 2020 but that is some way off.

Labour may need to look to their future in the east of the borough. In previous years, they have had councillors in SECT, Stanford and The Homesteads and they need to think about how they take a seat there. Perhaps Stanford East in 2019 may provide an answer.

Labour will be further buoyed by the massive majority that Barbara Rice gained in Chadwell St Mary. Three years ago, UKIP took a seat, two years ago, Gerard Rice survived by just 46 votes. On Thursday might, the unsinkable Barbara Rice won by 981. That will also be very encouraging for the prospective parliamentary candidate, John Kent.

Labour now go to the annual council with a decision to make. Do they settle for a year in opposition, further challenging and scrutinising a Conservative-run council or do they forge an alliance with the Thurrock Independents?

If the glass was half empty then they will be disappointed to have lost four councillors, especially their leader Graham Snell and deputy leader Roy Jones but we happen to think there is a lot to be positive about.

The victory by a majority of 383 for Tim Aker is probably, first and form-most a victory for Tim Aker. It just goes to show how highly Tim is thought of by the people of Aveley. Tim is not only a very good politician and communicator but it is clear the people of Aveley relate to him. That may be the difference between Tim and his former group leader, Graham Snell who, never really had a presence in his ward and subsequently saw his vote evaporate.

But what Tim may show is that his brand of populism and the mission statement of the Thurrock Independents of “People First” may have a future.

Candidates such as Chris Baker and Jan Baker lost but they did get 667 and 663 votes respectively. New candidate Allen Mayes polled 528 in Tilbury Riverside and Gary Byrne polled 575 in The Homesteads.

Yes they did badly in Chadwell St Mary, Stifford Clays but overall they accrued 6,407 votes (21.2%) and that is great base to build on.

Yes, the test is whether they are in it for the long haul should they lose the six seats they are defending in 2019 and six in 2020.

The challenge is whether they can really grow as a “residents” party. It has worked all over the county (Loughton, Havering, Uttlesford etc.

When they return to the chamber they may well have a say in a lot of matters. They could be the power brokers come the annual council on May 30th. They appear to be (as we said) deeply unhappy as to alleged campaigning strategies by the Tories in Aveley.

Their previous group leader was a big fan of the chief executive, Lyn Carpenter. We cannot see Tim Aker, Luke Spillman or Jack Duffin being quite such a “cheerleader”.

They may also have quite a role to play when the Local Plan and the possible proposals for 32,000 homes in Thurrock come into play.

They did not want to go gentle into that good night but they failed to make an impact. Peter Curtis was trounced in Aveley (171 votes). Funnily enough, their best result was the 206 votes they polled in Orsett.

The future does look bleak for Ukip. Even if there is a massive fallout after we Brexit on March 29th, 2019, we think voters won’t come flocking back.

Thurrock politics continues to be fascinating. Most people say “OIT….Only in Thurrock” and that keeps us interested.

These are vital times for Thurrock with many an issue, that we will focus on after the annual council.

On a personal note, it was good to see so many media outlets at the count. We counted: BBC Essex/BBC FiveLive, LBC/Heart, Gateway FM, Thurrock Gazette/The Echo, Thurrock Independent and YourThurrock.

Over at our sister paper, YourHarlow.Com, there was just us and BBC Essex/Look East.

We also hope you have been entertained by our ward by ward assessments. As we stress, they are not psephological treatises but just political pen portraits.

For the record, we got 13/16 right. We got Aveley, Stifford Clays and South Chafford wrong.

We applaud all councillors and campaigners, who, whatever the weather, went out there. Much respect to those who stood and faced the music at the count. Tis better to have fought.

We would like to thank Thurrock Labour, Thurrock Independents and Thurrock UKIP for helping us and making candidates available for interview.