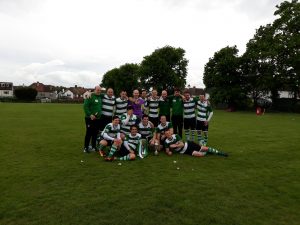 Catholic United’s meteoric rise through the Olympian League reached the summit on Saturday as Harley Kee’s goal was enough to defeat Bishop’s Stortford Swifts and with it the Premier Division title. The Hoops came up as Division One champions last season, having landed the Division Two and Division Three titles in the preceding seasons. They now cap it off with a Premier Division title win that saw them maintain their winning form through a punishing fixture schedule that saw them playing twice, sometimes three times a week, in April. They landed the Anagram Records Trophy last Saturday, finished Runners Up in the Essex Premier Cup and sign off a successful campaign at local rivals White Ensign next Saturday. Basildon United ended their season with a 2-1 home defeat at the hands of Leigh Ramblers. Last season’s Division One champions finished bottom and scored their final goal of the campaign through Izaih Antoine. Seb Allen and Jack Deasy notched the Leigh goals. Harold Wood Athletic signed off for the season with a 2-2 draw at Kelvedon Hatch. Charlie Liddiard and Robert Whitnell scored the Harold Wood goals that see them sit in 3rd place with Springfield and White Ensign both having one game in which to overtake them in the table. Kelvedon scored their goals through James Burt and Ben Gibbons which sees their side sitting in 6th place with one game left to play.

Buckhurst Hill already had the title in the bag before they visited Hutton. It was the hosts that needed the win to snatch the Runners-Up spot. The 1-1 draw makes things very interesting as it means that Great Baddow need to beat Newbury Forest on Monday evening to finish as Runners-Up. Should Great Baddow fail to pick up the full quota of points then it means Hutton will have another chance to finish 2nd next weekend. Dan Grennell had fired Hutton into the lead but Steve Townsend equalised in the 80th minute that leaves Hutton now hoping that a midweek result goes their way. A mid-table encounter between Old Southendian and Snaresbrook also ended in a 1-1 as Conor Lane’s goal for Old Southendian was equalled by Josh Woodcock’s strike for the visitors. A Chris Barry hat-trick plus a brace from Conor Maher saw Sungate beat Harold Hill 5-1.

Newham United handed Upminster a 6-0 defeat as Michael Omari’s brace was added to by goals from Lamar Obinkwo, Addean Gallimore, Nick Read and Jason Turner. Herongate Athletic needed to win their final game at Ramsden Scotia if they wanted to land the Division Two title. The goalless draw that they came away with means that May & Baker E.C. Res. end the season as Division Two Champions.