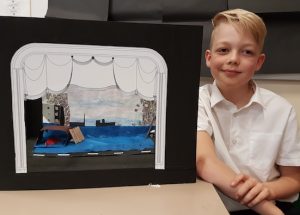 BUDDING designer Oliver Kempster from Little Thurrock Primary School is the primary school winner of the Royal Opera House Design Challenge which has this year been opened up to primary schools.

Over 800 Key Stage 2 children from 16 schools took part as a pilot for a future expansion of the project nationally. The competition asked them to design the set for a scene in The Royal Ballet’s Swan Lake. Over ten weeks, they worked through the six stages of design, developing their model-making skills and experimenting with different ideas and materials. Teachers from the schools then reviewed their portfolios and model boxes to choose a finalist from each class, and their work was submitted to the Royal Opera House for judging.

Oliver produced a design for the final act in Swan Lake, re-imagining the ballet to take place in a flooded street in New York. Oliver’s portfolio showed a detailed design process, demonstrating how he had interpreted the story, played with ideas and materials and considered the scale and depth of his final design.

Ruth Paton, an ROH designer who was one of the judges said: ‘It was a great pleasure to see the thought and imagination which had gone into Oliver’s design. To present the final act of Swan Lake in a flooded New York street was a wonderful leap of creativity. The communication of that idea in model form showed skill as well as vision.’

The judges also wanted to give a special mention to Olivia Demczuk from Bonnygate Primary School, who has been awarded ‘Highly Commended’ for her work.

Oliver and his class will be invited to the schools matinee of Swan Lake later this term, and will have a special back stage tour before the performance to see what happens behind the scenes at the Royal Opera House.

Molly Boughtwood, Design Challenge Co-ordinator at the Royal Opera House said: ‘Congratulations to Oliver, Olivia, and all of the finalists and children who took part in the project! The judges were very impressed with the imagination and creativity, and were excited to see the next generation of designers in action.’

Schools can register now to take part in the 2018/19 Design Challenge project, which will run in spring 2019 and be based on Kenneth Macmillan’s Romeo and Juliet. Please email design.challenge@roh.org.uk to register or go to www.roh.org.uk/learning for more details.