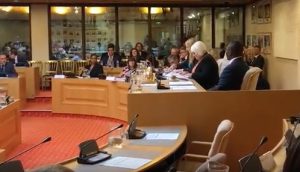 CHADWELL St Mary councillor, Barbara Rice has been chosen as the next mayor of Thurrock,

The decision was made at the first council meeting of the civic year at the civic offices in New Road, Grays.

The Labour councillor takes over from the outgoing mayor, Tunde Ojetola, who also lost his seat as a councillor.

At the (mostly) ceremonial meeting, warm tributes were paid to the outgoing mayor.

The newly installed mayor, made a speech, will detailed her background, growing up in Belhus and working as a nurse for many years.

You got the distinct impression that the former Matron will be running a tight ship in the chamber over the coming year.