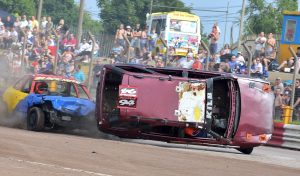 AVELEY’S Grant Kilburn went for a spectacular barrel roll along the Arena Essex home straight on Bank Holiday Monday, as the PRI Bangers provided the highlights during a lively days racing at the Thurrock venue.

Kilburn fell victim to Karl Douglas, who was touring round at reduced speed with a mechanical issue during the meeting final. Rather than pull to the infield, Douglas decided to cause a bit of mayhem instead, trying to clip cars as they came speeding past. He successfully caught Kilburn at the right angle to launch him over, and over, the car rolling long enough for the track photographer to reel off 25 photos of the car completing three complete rolls before crashing back to earth and bursting into flames. Thankfully Kilburn was quickly out and giving the thumbs up to the crowd.

In the restarted race, Jack Coveney made a bid to get past the race leader Tom Greenstreet on the very last corner. With heat winner, Cray Ingram and rapid East Anglian Steve Saw all going for the same piece of tarmac too, there was a huge crash with Saw coming out worse, smashing the wall head on along with Ingram. Greenstreet and Coveney avoided the clash and crossed the line in that order.

Heat winners earlier in the day were Luke Hardy, Ingram and Anthony Emson. Heat two saw Ray Edmonds tangle and land in the drivers side rear window of Josh Fuller. Fuller was unharmed but got a very good view of Edmonds gearbox, especially when his teammate Michael Merrit came round and steamed into Edmonds. All three were happy to pose with their auto-sculpture afterwards. A very entertaining Destruction Derby went the way of Jodie Cheeseman, who was the only one able to restart her car after a head on with the one other remaining car of Basildon’s Jake Simington.

A disappointing entry of Big Van Bangers nevertheless provided plenty of entertainment with a few PRI Bangers invited in to have a play. Callum Sealy proved to be a star of the races, picking up the first heat win and then earning a cheer as a wheel parted company with his car whilst lining up for the second race. A brief delay to reattach the wheel was worth it as he held a starring role in the race. He spun John Golden’s van on the home straight, John then rejoining and getting hold of Jamie Sealy, Callum then caught back up with the pair – firing Golden on at the corner and rolling over his own uncle! After another brief pause to rescue Jamie, Callum was again back in teh action at the restart, spinning Ricky Korpiela along the back straight and causing Korpiela to indulge in the lowest speed laziest rollover of the day. Sealy raced on to the win at the restart whilst Dan Reid took on the Big Van of Grays, Tony Cosans and took damage himself from John Golden.

The Destruction Derby saw John Golden roll twice, his Van being left on its side on the second occasion as the rest of them slugged it out. Reid showed plenty of guts going up against much bigger machinery, but he eventually succumbed to a hit from the Mini Bus of Cosans. Cosans was in the mix to the end, but Ricky Korpiela landed the killer hit on the front wheel of the bus and took the win.

Lee Madden had dominated some of the recent Stock Car events, but for this meeting he was upgraded to red and started further back – that upgrading proved too much of a handicap to catch Tommy Langley in both heats. Langley was making full use of an offer to borrow Vic Bilkey’s Stock Car. Langley’s success came to a halt in the final when he was part of a massive pile up which took him out, along with several other front runners. Having also been delayed in the pile up, it seemed unlikely that Madden would be able to hunt down the runaway leader Mick Wiseman, but he made progress towards the BMW and in a final burst of speed into the last corner he barged Wiseman wide and snatched the win in dramatic style.

Alfie Aldous dominated the Mini Stox from the front of the grid, racing away to three accomplished victories. A brief moment of panic when spotting the approaching Danny Elbourn in the first heat saw him nearly throw away his first win, but despite Elbourn pulling alongside, Aldous just held on to the win. The final saw Aldous head home Charlie Santry and Bradley Eltham.

The next action at Arena Essex is over the weekend of 9th – 10th June as the Banger racing world congregates to celebrate the Roy Rawlins Testimonial. This is by far the biggest event of Arena Essex’s 40th year and a huge crowd is expected with a now 68 year old Roy himself taking to the wheel of a Ford Granada on the Saturday. A full supporting programme accompanies the Banger action on both days.