Man sought over burglary in Aveley 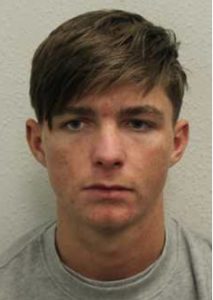 ESSEX Police would like to talk to Paul Ellis, 18, from East Sussex, in connection with an aggravated burglary in Aveley.

A spokesperson said: “We received a report on Tuesday, March 20, that up to six men wearing balaclavas forced entry to a property in Bredle Way at 12.55pm.

They then tried grabbing a woman’s chain from around her neck but she managed to escape and alert neighbours. The suspects fled the scene.

“An 18-year-old man was arrested in Leicestershire on Wednesday, May 16, and was also released under investigation.

“Ellis is 6ft 1ins, of a slim build, also goes under the name of Paul Nugent and has links to Brighton and Redhill”.

Anyone with information is asked to call the Serious Organised Crime Unit on 101 or Crimestoppers anonymously on 0800 555 111.

One Response to "Man sought over burglary in Aveley"