Giant Docker is heading to Tilbury

KINETIKA, the renowned international outdoor arts company, has been commissioned by the Tilbury on the Thames Trust to create a four metre tall puppet of a docker, based on the many dockers who once worked on the docks in Tilbury. The Tilbury Docker puppet will debut at the Windrush 70th anniversary celebration at Tilbury Cruise Terminal on Friday 22 June. 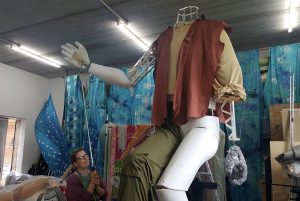 Kinetika has been running workshops over the last few months to gather ideas and research how the Tilbury Docker puppet should look and what he should wear. Students from Gateway Academy and South Essex College have all played a part in designing the puppet.

KS3 and KS4 students from Gateway Academy attended a full day workshop in February this year to begin designing the Tilbury Docker puppet. Working with Kinetika’s artistic director, Ali Pretty and puppet designer, Tony Mason, the students created a number of different designs, mapping the elements of the puppet out on paper to scale to get a picture of the overall look. At the end of the workshop, an initial design was developed and then finalised with further input from students from the South Essex College’s Costume Construction degree course.

Rachel O’Dwyer, a teacher at the Academy who accompanied the students to the workshop has continued to be involved with the project. ‘‘I saw that Kinetika was looking for local artists to help out with the sculptural aspect of the puppet and, as sculpture was what I did my qualification in, I volunteered. I really love being at the High House Production Park and Kinetika’s studios so try to go as often as I can, ‘ she said.

Students from each year of South Essex College’s Costume Construction degree course have also been involved in making the Tilbury Docker’s outfit. Using the skills they have learnt on their degree course, the students have been designing, screen printing and constructing his costume, incorporating into his waistcoat designs based on the different cargoes the dockers had to unload from the ships arriving from around the world. Images of the students working on the Tilbury Docker designs can be found on Instagram at @costumeconstructionbasec

The making of the Tilbury Docker puppet is the beginning of a process of reviving the Tilbury Carnival. Kinetika has plans to stage a carnival in 2019. The Tilbury on the Thames Trust aims to make the Cruise Terminal into a vibrant space for use by all the community and the carnival is part of that development.

The Tilbury Docker will make his first appearance at the Tilbury Cruise Terminal on 22 June for the celebrations to mark 70 years since the Empire Windrush brought the first Caribbean passengers to a new life in England. He will also appear on 14 July at intu Lakeside during Kinetika’s Thurrock 100 walking festival which will run again this year, and he will return to Tilbury for the Port Open Day on 21 July.

Work on the Tilbury Docker puppet kicks off a very busy summer for Kinetika. Creative Director Ali Pretty said: “Kinetika moved to Thurrock four years ago, and we have had a fantastic time making friends locally and discovering so many hidden gems just 15 miles east of Central London. Tilbury, the people, the Cruise Terminal and the wild horses grazing on the marshes by the river, is one of the most inspiring places here, and I’m very excited that the Tilbury Docker puppet will draw attention to its history and its enormous potential as part of the wider national Windrush celebrations.”