Man cut from car after smash outside Purfleet Primary school

On arrival firefighters reported that two people were trapped, one in each car, and worked to release them both by 10.05am.

Both casualties were left in the care of the Ambulance Service. 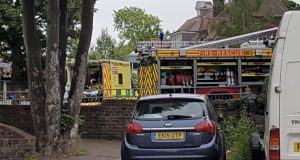 THE EMERGENCY services attended a road traffic collision in Purfleet this morning (Monday).

The incident happened at just after 8.20 am on Tank Hill Road close to Purfleet Primary.

A source has told YT that a male was cut from the wreckage of one car after two cars collided.