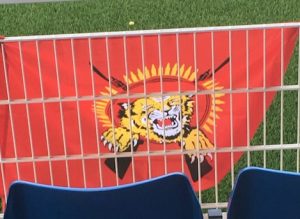 WE promised you goals in this game and that was the case. However you wouldn’t have predicted this score during the first 40 minutes. Abkhazia dominated possession and created several chances however Tamil Ealam were resolute in defence and promising on the break.

The deadlock was broken on 40 mins with a ball over the top to Ruslan Akhvlediani who produced smart left foot finish into the top of the net leaving the goalkeeper no chance.

On 63 minutes, Shabat Logua added a second for Abkhazia. On 71 minutes, Ruslan Akhvlediani connected with a well judged through ball to slot the ball calmly into the bottom left corner.

Just two minutes later a contested long ball was controlled by Ruslan Akhvlediani. Akhvlediani squeezed the ball through, via a fortunate deflection, to Ruslan Shonia who easily rolled the ball past the goalkeepers left hand to make it 4-0.

On 83 minutes Shonia turned provider and crossed from the right of the box for Astamur Tarba to finish. Just before the final whistle Ruslan Shonia made it 6-0 for Abkhazia to cap a very productive night.

The vocal and colourful Abkhazian fans left Aveley in bouyant mood. However they will wonder why their side couldn’t have produced such a display earlier in the competition.