ON Thursday 7th June at 12pm the Parkside Stadium Aveley will host its second CONIFA World Cup game. The game features Matabeleland v The Chagos Islands, and to say there are a few stories surrounding this game is an understatement. 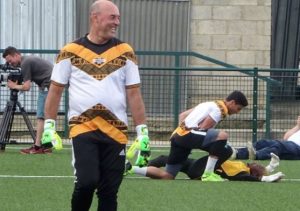 Rumour has it that Liverpool legend, Bruce Grobbelaar, will start in goal for Matabeleland. The years may have past but many Liverpool fans may be forgiven for thinking that they’d have been better with Bruce in goal for their recent Champions League Final game. Matabeleland were supposed to have been playing Ellan Vannin, until the Isle of Mann side walked out of the competition due to a dispute with CONIFA over the eligibility of one of their players. Instead Matabeleland will face the Chagos Islands

Matabeleland is a region in Zimbabwe named after its inhabitants the Ndebele people. Other ethnic groups who inhabit parts of Matabeleland include the Tonga, Kalanga, Venda and other peoples. As of 2012 the region was home to 683 893 people. The region is rich in minerals including gold but these industries have been badly effected by a lack of water supply. A proposed Matabeleland Zambesi Water Project has yet to be delivered.

Matabeleland is considered by some to be the birthplace of the Scout movement. Robert Baden-Powell, who later became the founder of the Scout Movement, and the younger Frederick Russell Burnham, the American born Chief of Scouts for the British Army, first met and discussed the concept of a broad training programme in woodcraft for young men, rich in exploration, tracking, fieldcraft and self-reliance.

The Chagos Islands are 60 individual tropical islands in the Indian Ocean, situated south of the Maldives. They are part of the British Indian Ocean Territory. Chagossians lived on the islands for more than 150 years until they were evicted.

Officially part of the British Indian Ocean Territory, the Chagos were home to the Chagossians for more than a century and a half. The population spoke Chagossian Creole. In the early 1970’s the population were evicted from Diego Garcia, the only inhabited island, to make way for a US military base. This base is the largest military base outside the US. Displaced Chagossians now mostly live in the Seychelles, Maldives and the UK.