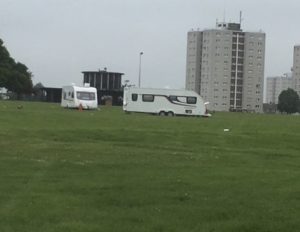 ESSEX’S Police and Crime Commissioner has said criminalising trespassing as a means of stopping illegal traveller encampments would require too much police manpower for it to be worthwhile.

But Roger Hirst does want extra powers on top of those currently available to deal more effectively with illegal traveller sites.

His comments, which stop short of endorsing an Irish Option – named such because of the power held by the Garda in Ireland to arrest those involved in trespassing on land such as encampments – comes at the end of a Government consultation into the best way to tackle illegal traveller encampments across the UK.

Mr Hirst, Police, Fire and Crime Commissioner for Essex, said in a response to a Home Office consultation on unauthorised development and encampments: “I believe that additional power would be beneficial. It would simplify the eviction and subsequent prosecution process and increase public confidence because a simple process would give greater public reassurance.

“However, it does need to be recognised that criminalising trespass will have implications on the police resources that would be required to respond. The current powers are sufficient but they are perhaps not as efficient and effective as I would like.”

In the Republic of Ireland, a member of the Garda has power to arrest trespassing travellers without warrant as well as being able to remove, store and dispose of ‘objects’.

A maximum penalty for contravention is a fine of up to 3,000 euros or imprisonment for up to a month, or both.