Cricket: Orsett and Thurrock 3rds go top of the league

ORSETT & Thurrock 3rd XI leapfrogged local rivals Belhus to go top of the league after a convincing victory away to Harlow. The game was watched by various media outlets including “Your Harlow” who I must say had a striking resemblance to the Your Thurrock reporter!

Skipper Tyrone Owen again needs to practice his tossing skills as OAT were inserted on a dry white pitch by the Harlow captain.

Harlow entrusted the new ball to the seaming duo of Dobson and Qureshi while OAT opening batsmen were Andrew Monkey Hills and Greg Bones Mendham. Hills was involved in an early moment of controversy as Qureshi launched a massive appeal, claiming an edge through to the keeper. The umpire was unmoved and the Harlow bowler struggled to keep his emotions in check as the experienced Hills stood his ground with a bemused look wondering what the appeal was for. 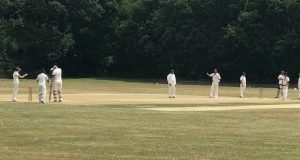 One way to avoid any doubt in cricket is to clatter the stumps and to be fair Harlow ended up doing this six times during the innings as there was more falling timber than a save the rainforest campaign video!

First man to go was Mendham for a decent knock of 21 runs that included some excellent cuts, always a good thing for a part time hairdresser! He was bowled by Zahid who then promptly repeated the feat, Hills this time the victim for 18.

OAT batsmen come and went but they were all getting starts meaning a decent total was building without anybody noticing it. Klaus Smith was bowled by Mashood for 12 and then Elliot McCartney followed him back to the pavilion with the same mode and bowler for 18 runs. Mashood claimed a third wicket when he had Kooyman caught.

Michael Janitor Parker walked out to the middle to join Skipper Owen and the decision was taken to try and occupy the crease for a while leaving Owen the established batsman to keep the score ticking. Parker himself had moved onto 13 but it was to prove unlucky as an attempt to dispatch leg spinner McGarth towards somewhere near Stansted Airport led to another cry of TIMBER as Parker was through the shot before the ball had actually reached him.

Owen continued to bat with the tail and useful runs from Feeney (9), Wonderling (9) and Brooks with 12 not out put a bit of respectability on the scoreboard again. Skipper Owen top scored with 36 and Andrew Packer was the last man to go as OAT ended up on 168.

Harlow seemed confident that they had already done enough at the teabreak but OAT knew their strength is in their fielding, let’s not forget that some of this team have defended totals as low as 98 when playing at The BCG in Blackshots before the Thurrock and Orsett teams merged.

Harlow started their reply with McGarth and Quayyum at the crease whil OAT opened the bowling with Hills and Packer. With a bone dry quick outfield, OAT needed to field well to defend their total and luckily today was the day they bought their “A” game to the party. Quayyum was the first man to go following a mix up with McGarth and Andrew Hills calmly removed the bails for the run out.

Muhammad was the next to depart as Packer got enough of his trademark swing to force an outside edge through to the gloves of Wonderling who completed the catch at the second attempt while laying on the floor! The next wicket was a nod to the old saying if at first you don’t succeed then try try again. An LBW appeal from Packer was turned down by the standing umpire but in a moment of quick thinking the bails were whipped off while Sudra was wandering out of his crease more conceryif the umpire had given the LBW or not Andrew in the end was given out stumped by the square leg umpire.

Iqbal was next to the crease and his stay lasted precisely one ball as he was caught behind for a golden quacker to Andrew Packer who was a poet, but did not know it.
OAT had this game by the scruff of the neck and kept taking wickets at regular intervals and the support bowlers also got in on the act. Arm ball specialist Stephen

Brooks dismissed Aldrid for another duck off the safe hands of Feeney. Feeney then got himself a wicket, opener McGarth’s long vigil was over as he was another victim of George Wonderling behind the stumps. Hassan was run out for 5 and the game was now a matter of when OAT were going to wrap up proceedings. Zahid went for a golden duck off Feeney thanks to a stunning catch and celebration by McCartney at backward point. Feeney completed his personal wicket haul by bowling Rasool and then Brooks delivered yet another arm ball to trap Dobson LBW to complete another glorious day in the sun for the OAT travelling circus.