A growing logistics company with a new East London depot has recruited 16 new employees to run its southern operation.

Ningbo Palletised Distribution will now deliver to the Romford and Ilford postcode areas of the capital as part of Palletline, the national freight logistics network.

In addition to thenew membership contract area, Ningbo will deliver its own freight in south east London and east London.

Ningbo’s 35,000 sq ft base in Purfleet Industrial Park includes new IT equipment and software at an investment of £30,000.

Eight vehicles worth a combined £250,000 and six trailers have been acquired for the London routes, and the company has invested £15,000 into training for new staff.

Ningbo’s headquarters in Wrexham, North Wales, has also benefitted from the new contract with the creation of one new job in accounts. In addition, all customer service and traffic management for the new Purfleet depot will be handled from the headquarters.

Managing director Chris Stockton said: “The new London premises are in an ideal area to continue a fantastic period of growth for the company.”

“The depot is just off the M25 and is part of a densely populated area, which we hope will lead to a high amount of applications. My main fear was being able to employ quality staff and good drivers, but we were able to take on Young’s Transport’s former employees, who had previous Palletline experience, which has massively helped those who had been made redundant.

“It’s an exciting time to join Ningbo as we start up a new era of activity – anyone interested in playing a part in our dynamic team at either the Wrexham or London depot, please get in touch. The business is only as good as our employees, and I put huge emphasis on this.”

Ningbo Palletised Distribution is part of the Ningbo Group. Sister business Ningbo Furniture, is a supplier of contract furniture. 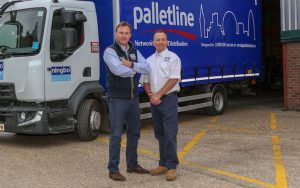