AMAZON officially launched its fulfilment centre on Windrush Road by opening its doors to political, business and community leaders including Jackie Doyle-Price MP who officially opened the building with guests including Terry Piccolo, Deputy Mayor of Thurrock. 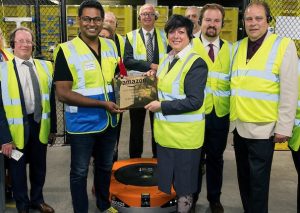 Guests were treated to a behind-the-scenes look at what’s involved in fulfilling orders for customers across the UK and the rest of Europe. They were also given the chance to try their hand at some of the activities carried out by the team in Tilbury.

The Tilbury site is fitted out with advanced Amazon Robotics technology. The robots slide under a tower of shelves where products are stowed, lift it and move it through the fulfilment centre. Find out more about Amazon Robotics here.

Amazon Tilbury General Manager, Prajvin Prakash, said: “It was a real pleasure to welcome representatives from the community to mark our official opening. We’ve been operating for eight months now and throughout that time we have been made to feel very welcome by the Tilbury community – it was great to say thank you and to have our MP Jackie with us to mark this special day in Amazon’s history.”

Jackie Doyle-Price MP said: “It’s an honour to officially open the facility. It’s fascinating to see first-hand what goes on in this centre and it’s been great to learn how some of the products stowed here are shipped to customers. Not only has Amazon provided additional employment with excellent career and training opportunities in the area, it has also made a significant contribution to the wider community. This is an example of the scale of Amazon’s investment in Tilbury, and it also illustrates both the success of the borough of Thurrock and the incredible growth of jobs in Essex.”