Campaign to change name of Purfleet to Purfleet-on-Thames 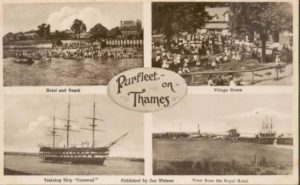 THERE IS a petition to change the name of Purfleet to Purfleet-on-Thames.

Lead campaigner, Trevor Batchelor has spoken to YT and told us why he is petitioning for the name change.

Mr Batchelor said: “I am leading a petition on behalf of our forum to officially change the name from Purfleet to Purfleet-on-Thames.

“This has been talked about for many years by many people before me. The name was first suggested in recent times during the nineties. When the forum started in 2002, they took on the name. First known use of the name was in 1866. Use of the name grew in late Victorian, early Edwardian Times. See attached PDF of postcards. Joe Watson, landlord of the Royal gave their address as The Royal Hotel, Purfleet-on-Thames on the 1911 census.

What do you think of when you think of Purfleet? The usual answers are the Garrison Estate, the industry or people have not heard of us or know where we are. Changing the name will raise the profile of the area and with the regeneration gives residents hope for the future. With outline planning in for the regeneration of Purfleet it seemed the ideal time.

Shortly after we showed Ken Dytor, head of PCRL our campaign flyer he thought it so strong that he rebranded the Purfleet Regeneration – Purfleet on Thames.

In March the development was promoted at MIPIM in the South of France. As you reported on 29th March three heads of council were there with others promoting Thurrock and promoting Purfleet on Thames.

“I emailed all our councillors earlier in the year about the name change. All responses were positive. Our three ward councillors support the change as does head of the council Rob Gledhill.

Thurrock have not had any place name changes, certainly not in living history, so getting answers as to how to do it have been slow.

The petition is live. A link is on the home page of our website. Aware of poor petition responses in the past we will in the next few weeks be mailing all residents in Purfleet to sign our petition, petition boxes will be left in key areas around. Any resident of Thurrock or anybody who works or goes to college in Purfleet are eligible to sign.

Most importantly last week Thurrock Council gave their support to the name change.

More information and reason for name change can be found at: