Tilbury continued their good pre season, with a hard fought win over new step 6 side Hashtag United in front over over 300 people at Chadfields on Monday night.

The game was preceded by a minutes applause in memory of life long Tilbury supporter Mavis Billinghurst who recently passed away. Just before kick off Hashtag United’s goalkeeper Andy Jeffs-Watt presented flowers on behalf of his club to Tilbury captain Jack Carlile. The flowers throughout the game laid on the terraces where Mavis would have stood.

The all important goal came on 13 minutes, when striker Adam Vyse found the net. Both sides played some good football with Hashtag goalkeeper Watts making some fine saves.

For the second half, Tilbury introduced former Premier League striker and Congo international Tresor Lomana Lua Lua who showed at 37 years old he still has what it takes to play at this level with some excellent skills. 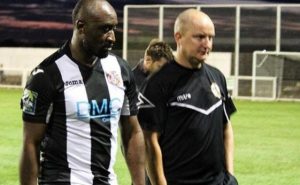 Tilbury have just 48 hours before they are back in action when they welcome FC Romania on Wednesday night.