WOKING stole away from Rookery Hill with three points after a controversial decision by referee Wayne Cartmel gave Max Krectchhmar the chance to net a winner from the penalty spot seven minutes into added time. 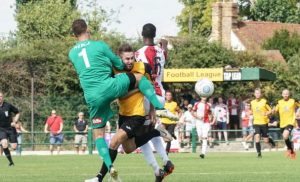 It was tough justice on Rocks who had what looked a good goal ruled out in the first half when keeper Herbert Schotteri fumbled the ball over the line but he feigned injury and conned Mr Cartmel.

East Thurrock’s new look side were competitive throughout against one of the title favourites but might have found themselves behind in the early stages had Jake Hyde not shot wide when well placed.

Rocks responded well and Ryan Scott headed wide and Albert Levett’s shot flew wide by inches, all before the controversial moments when the ball went over the line.

And there was more drama involving the referee in the closing stages of the half when Tom Derry got between the keeper and defender Nathan Collier and as the keeper raced from his line she smashed into the Rocks striker, raising both knee and arm as he flattened him off the ball.

It seemed a certain foul and likely red card but Mr Cartmel astonished the crowd of 532 by awarding a free kick against Derry.

Woking, after a blast from boss Alan Dowling at half time, reshaped dominated possession in the second half but couldn’t make the breakthrough, despite several frantic goalmouth scrambled which saw the ball cleared off the line three times by a resilient home defence well-marshalled by captain Lee Burns.

And there was always the threat of a Rocks breakaway, with Schotteri having to make the save of the game from Danny Harris.

In the closing minutes, four minutes into added time, Woking won a corner but a poor delivery saw Cards sub Paul Hodges race away, shoulder to shoulder with Tom Stephen, who had the option of a foul and likely ‘yellow card for the team’ as they sped towards the box but he stayed honest only for the canny Hodges to show the exact opposite quality and as the two entered the box he felt some marginal contact and went flying. Mr Cartmel bought the con trick hook, line and sinker and awarded the penalty.

Kretschmar converted, sparking a pitch invasion, throwing of a flare and unruly celebrations by a minority group of Woking fans who seem set to be a blight on the Vanarama South this season.

They were able to enjoy a rather undeserved win – albeit that the visitors enjoyed the lion’s share of the ball over 90 minutes – but if there was any consolation for the Rocks it was in a highly encouraging performance from a revamped team – only two of last season’s squad featured – and they though they face two more very tough tests against Dulwich at Tooting on Wednesday, and Torquay United next Saturday they should feel confident of growing into side that can more than hold its own in a very competitive division.