A new truck park spanning 5-acres is being opened by Hireco later this month.

THE site is being built to provide hauliers with much needed space to park up and take a break.

Nearby facilities are said to be too expensive and poorly equipped. With local lay-bys being closed off, this lorry park couldn’t come soon enough reports the Road Haulage Association website.

The site will feature 169 bays for trucks and trailers. With ANPR activated gates, the park will be open 24 hours a day, 7 days a week. Lorries will be able to roll in, have their number plates scanned and roll back out after their stop. 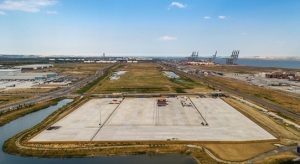 Contract customers will find number designated bays to stop in for ease of access. The site will have cash and card pay stations for casual customers, with Hireco currently exploring the potential for an app-based payment system.

The park will be fully equipped with separate male and female toilets and showers, coming late November. With a café, restaurant and vending machines to boot, drivers will be able to grab something to eat whether they’re staying all night or just popping in for a quick rest.

Hireco are making sure the site will be safe and secure for drivers and their trucks. With a fully equipped CCTV system and intelligent PTZ cameras capable reacting to live events, a watchful eye will be kept over the park.

The site will also boast a Maintenance service with SERVCO. With a Hireco station nearby, drivers will be able to have any issues looked at quickly and at a reduced cost. Whether it’s a damaged wing mirror or a trailer defect, drivers can rest easy as their problems are sorted.

“We’re delighted with the news of this new lorry park. There simply aren’t enough safe, secure places to park trucks in the UK with the sort of toilet and washing facilities on offer here.
However, an extra 169 places for hard working lorry drivers isn’t enough and much more sites like this are needed – urgently. ”