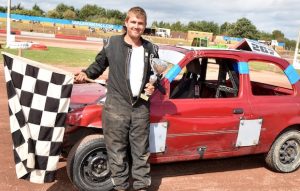 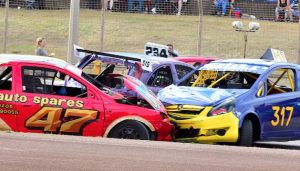 James Steele won the Micro National Banger World Series Final at Arena Essex on Sunday, thanks to a little help from his friends.

Reigning World Series Champion, Bradley Lee appeared to have the race in the bag having left behind pole position man Dean Goodearl and Jason Jackson. However Ricky Hutton had clear intentions of helping out his team mate on the pit bend. He turned around and headed for Lee, Lee swerving at the last moment and just getting caught in the drivers door, he continued but lost a whole bunch of places. Hutton now turned his attentions to Alfie Lee, who was closing in on the new leader James Steele. Hutton made contact with the side of Lee, but Lee shrugged it off. Hutton was now stranded on the pit bend with no drive and ironically Steele came round and ran into his team mate, delaying him significantly. This looked to give the momentum back to Lee but inexplicably Lee chose to take revenge on Hutton, rather than concentrate on the race and after destroying Hutton with a big hit, his car crying enough on the very next bend.

The Micro National Bangers enjoyed three other races on the day with former Stock Rod man – Daniel Newman winning the first – which was a Last chance race for the World Series final. Lennon Phillips and Ryan Farner were the other winners whilst an entertaining Destruction Derby went the way of Matt Butcher after Jason Jackson was disqualified for infield use.

The Stock Rod Essex Championship started with a bang with Brian Keneflick spinning on the first corner and getting hit by Tyler Scott. The restarted race was sensational with Matt Rowling shadowing pole position man, John Dunn for almost the entire distance. These two were the class of the field with Alex Martin fighting hard to keep third place a quarter of a lap behind. With just two laps to go, Robert Taylor had a hose burst on the back straight and the entrance to turn three became coated in a mixture of water and anti-freeze. Dunn hit the slick and slid out wide allowing an unbelieving Rowling to take the lead and the subsequent championship victory.

The best race from the Stock Cars unfortunately resulted in a hospital visit for formula stalwart Steve Davies. Davies had just fended off a penultimate corner attack from Karl Totham, when Totham went for that Stock Car staple – a last corner lunge. Totham, made contact, but whereas Davies would have normally given the barrier a glancing blow, a slick surface saw him spear off into an almost head on collision with the wall.

It was Totham clean sweep when racing resumed with Karl’s heat win backed up by a heat and final double for son Aaron.

The Lightning Rods saw a clean sweep for Reiss Carroll. Carrolls two heat wins were fairly pedestrian, thanks to his front of the grid start, but he worked his way past Wayne Londors in the final.

The next action at Arena Essex is this Bank Holiday Monday with PRI Bangers topping the bill, whilst the 2L Stock Cars contest their Essex Championship and the Stock Rods and Lightning Rods complete the programme. Start time 1pm.