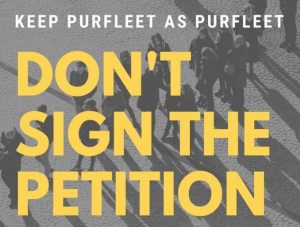 A PURFLEET resident has started a petition calling for Purfleet to keep its name as it is.

Recently, we reported that there is a petition for the area to change its name to Purfleet-upon-Thames.

Campaign to change name of Purfleet to Purfleet-on-Thames

Now there is a campaign to keep the name as it is.

The campaign has been spearheaded by local resident Si Braybrooke.

Not all residents in Purfleet are happy with a proposal to change the name of the village. Some villagers have now started a campaign urging people NOT to sign the petition but to preserve the historic name of Purfleet and to emphasise the need to be proud of the name. They are also rallying against the process that the proposal for the name change is taking and asking that there be a referendum with all information fully disclosed and without outside financial backing.

• Above all any proposed name change should be a democratic process. There should be a
referendum for residents with the pros and cons of keeping the name and changing the name set out so people understand fully the implications.

• There should be no financial or promotional help from outside interests such as PRCL who have already adopted the name and used it to sell investment opportunities in the south of France. These are people who have no interest in the historical value the name has but know that it is definitely easier to sell somewhere with ‘on Thames’ in the name than just Purfleet. See ourpurfleet.com

• The community forum should not be running the renaming campaign as they have wanted this name change since their inception 16 years ago and have always used the name as the official name of the forum creating unfair bias from a forum that should be unbiased and representing all residents not a few who with pet projects and personal agendas. See purfleet-on- thames.org

• There should be full disclosure on how much a name change will be for the taxpayer. Signs for the village and highways, local businesses and council facilities. Also the paperwork that is involved in this. There has been no costings set out – as taxpayers many residents would rather their tax was spent on more worthwhile projects such as speed reduction and pollution.

• We should be proud of our heritage,

• The name Purfleet dates back to the 11th century

• The Purfleet Royal Gunpowder Magazine was established in the 18th century

• The song, Amazing Grace, by the local Rev. John Newton, was inspired from his near-death boating accident in Purfleet.

Purfleet has only actually been referred to as Purfleet-on-Thames on a few postcards (mainly taken by the same person) and documents, such as the census form from the landlord of the Royal Hotel in the early 20th century so there is very little historic basis on which to found this name change.

J.M.W. Turner made sketches of Purfleet

Margarine has been made in Purfleet for over 100 years

3 Responses to "Campaigner says no to Purfleet name change"