Detectives appeal for other victims of serial rapist to come forward 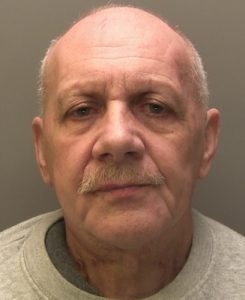 On Monday September 3, 68-year-old Christopher Clark was jailed at Basildon Crown Court for 13-years with a five-year extended licence after pleading guilty to raping the woman in Thurrock.

Serial rapist Clark, who was already serving life for another serious sexual offence when he was sentenced, lived in the county and may have carried out other offences.

Essex Police has now taken the step of releasing an image of Clark, as he looked in 1996, in case other women believe they may also have been a victim of this man

Clark, now of HMP Lincoln, moved to Canvey Island in 1983 and is believed to have lived there until mid to late 1984.

On September 17 1985 he raped a then 18-year-old woman as she walked to catch the bus in Clockhouse Lane, North Stifford. He was not arrested for this offence at the time.

In 1986 Clark was arrested and charged with 13 offences including rape and burglary with intent to rape. The offences happened in South Benfleet, Grays, Great Baddow, South Woodham Ferrers, Hornchurch and Upminster.

Press dubbed Clark the “early bird rapist” as during the offences he would watch the homes of his victims, waiting for their husbands to leave before in some cases threatening them with knives, sexually touching them and in two cases raping them.

During the incidents in Hornchurch and Upminster he raped the women in their own home. Clark was convicted in relation to five of these offences, with the court ordering eight to lie on file, and he was jailed for 10-years.

Clark was released from prison in 1996 and it is thought he may have regularly travelled to Essex and other areas in the South East prior to once again being locked up in 1997 in connection with another sexual offence in Bath.

Clark was still serving a life sentence in connection with that offence when he was sentenced for the Thurrock rape this week.

The Essex Police Cold Case Investigation Team has worked alongside colleagues from the Avon & Somerset Major Crime Review Team who have carried out an extensive review into Clark’s offending history.

Senior Investigating Officer DCI Stephen Jennings of the Kent and Essex Serious Crime Directorate said: “We know that Clark is a serial offender and has been committing sexual offences that we know of, as early as 1966.

“Clark lived in Essex, and Canvey, specifically, for at least two years prior to committing the rape in Thurrock. Given his offending history it seems unlikely that he did not or would not have committed offences during that period.

“Furthermore during 1996, having been released from prison for a brief period, we know he continued to visit Essex and other areas in the South East.

“Clark has, throughout his life so far, perpetrated numerous sexual offences ranging from indecent exposure and indecent assault to violent rapes at knifepoint.

“If you recognise Clark from the images shown and have been a victim of a sexual offence perpetrated by him but have not yet come forward to police, please do.

“It’s absolutely imperative that we continue to ensure that his victims – as with any victim of a crime – receive not only the justice that deserve but the appropriate support too.”

If you believe you have been a victim of Christopher Clark contact Essex Police on 101 and ask to be put through to extensions: 42003297, or 42002874 or 42074423. Alternatively email SCDMajorCrimeColdCaseTeam@essex.pnn.police.uk

The Essex Partnership or Rape Crisis Centres (Synergy Essex) offers a range of specialist support and information to victims and survivors who have experienced any form of sexual violence at any time in their lives. The service supports for those who have or have not reported their experience to Police.

The Synergy Essex information and support line can be contacted on 0300 003 7777 or visit their website www.synergyessex.org.uk. Details of further support agencies can also be found at www.essexvictimsgateway.org