One woman was transported by air ambulance to the Royal London Hospital with serious injuries.

Firefighters were called to assist at the scene of a road traffic collision involving one vehicle which had flipped over onto it’s side on London Road in West Thurrock.

Fire crews worked with paramedics to help release one casualty who was trapped in the vehicle.

The casualty was released by 2:40pm and left in the care of the Ambulance Service.

THE emergency services have been in attendance in West Thurrock after road traffic incident.

Fire crew, land ambulances and air ambulance have attended at the the scene close to West Thurrock Memorial Ground.

YT has contacted the respective services for more details. 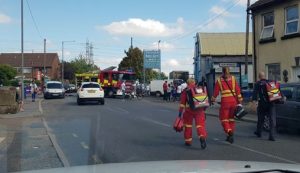