A special exhibition celebrating Bengali culture and the annual Durga Puja festivities in West Bengal, has opened at the National Theatre, Riverside Walkway, Southbank, as part of the Totally Thames Festival 2018. 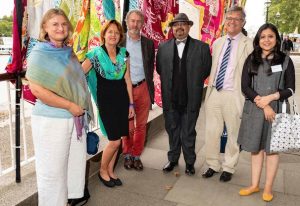 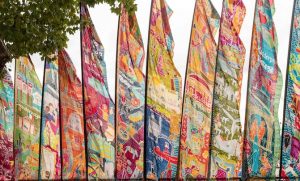 Bengal’s Durga is an exhibition which provides a rare insight into the outpouring of creativity, artistic innovation and cultural celebration of Bengal’s traditions. The 16 exhibition panels, with photographs by Manjit Singh Hoonjan, have been curated by Ali Pretty of Kinetika and Kamalika Bose. The panels will be on display till 30th September 2018.

Durga Puja, also referred to as Durgotsava or Sharadotsav, is an annual festival in South Asia that celebrates worship of the Hindu goddess Durga. For ten days, around ten million revellers take part in the Durga Puja festivities with its thousands of mega idols, hundreds of themed art installations and processions to the River Hooghly.
Bengalis are firm in their claim that it is the world’s greatest public festival. This year’s festival starts on 16 October and ends on 19 October.
The exhibition has been put together by the Department of Tourism, Government of West Bengal in collaboration with the British Council, as part of its 70 year anniversary celebrations in India.

“Durga Puja is a celebration of cultural identity that goes beyond religion. Millions of people come together through tradition, art, performances, music and food. Coincidentally, Durga Puja in its present form traces its origin to interactions with the British in the late 18th century. We are delighted to present this exhibition at Totally Thames 2018 and hope it will showcase West Bengal as a destination for experiential tourism. We also seek to establish collaborations between artists from across the world with the artists of West Bengal.”

Debanjan Chakrabarti, Director East and Northeast India, British Council, said: “This exhibition is a legacy programme arising out of the Silk River project by Kinetika, which was one of the flagship programmes of UK-India Year of Culture in 2017. British Council India has been inspired every day of the last 70 years by the art and culture of West Bengal. I hope this exhibition, which showcases the creativity and culture of Bengal’s river communities, will inspire young people from both India and the UK to build enduring connections through education, arts and culture for the next 70 years.”