THURROCK Council is refusing to explain why a street in Stanford-le-Hope did not have its bins emptied.

On Tuesday, we were sent a photograph by a reader who lives in St Andrews Way, Stanford-le-Hope. 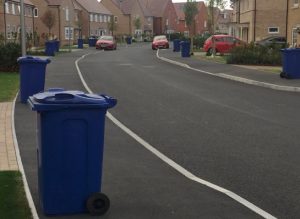 The picture shows a row of un-emptied bins in a street with just a couple of cars parked.

In light of a general response made by Thurrock Council last week to a general question asked by us, we decided to ask a specific question.

We asked: Why were you not able to collect bins in St Andrews Way, Stanford le Hope?

If it was a question of obstruction, do you have any photographic evidence to back this up?

We received the following reply.

“Waste collections can be missed for a number of operational reasons, including poorly parked vehicles preventing bin lorries from being able to access roads, traffic congestion and staff availability. When roads have been missed, waste is normally collected the following day during normal working hours”.