Many of the groups they have helped over the past three years were represented at the event at the Community house on Seabrook Rise and they explained what has been achieved.

Grays has had something of a bad press in recent times, much of it undoubtedly deserved, but underpinning the town is a community of volunteers and committed people who still see a positive future and who are achieving a huge amount – much of it under the radar.

The funds for the Big Local group were provided from the Big Lottery Fund, with the aim of stimulating community activity in an area which has seen deprivation and been starved of resources.

The chairman of Big Local, Andrew Blakey explained how the money was being just not just to fund good causes, but to attract further match funding which meant the work of the organisation could go much further.

He told attendees at the event, which doubles up as the organisation’s annual meeting, that £137,768.52 had been directly spent by Grays Riverside Big Local but it had brought in £372,290 in additional funding.

“So we have brought in nearly three times the amount by coming up with good ideas that other people thought would be a good idea to fund. By doing that we have been able to spend just over half a million in this area!

“I like to get other people to spend, so the one million we get can be made into two or possible even three million. So anything that comes to the board I say how can we match it so that we get the best possible for this area.”

Among those who spoke to the meeting was Neil Woodbridge, CEO of Thurrock Lifestyle Solutions, who told how many of the organisations helped by funding were social entrepreneurs who put money, time or skills back into the community from their projects.

He told of how the School for Social Entrepreneurs had been set up at Thurrock Adult Community College – with the help of additional funding attracted by Big Local – and the benefit it was bringing to the local community.

“Creating art relieves stress, encourages creative thinking, increases brain plasticity, and provides many other mental health benefits. And anyone can do it,” she says.

Other speakers on Sunday included Steve Catchpole who told of the work of the Grays Beachcombers litter-picking group, Geoff Stringfellow, one of the directors of the volunteer-run Lightship café at Grays beach, and Sian Chaplin, who told of the many different events and supportive opportunities that were available for the local community to take part in at the Community house.

Michael Casey, editor of the Your Thurrock news website, spoke about the Grays Lives project which records local stories, characters and unique insights into the area. You can watch them at http://www.yourthurrock.com/?s=Grays+Lives+Project
Special events helped by Big Local including the Thurrock International Celebration of Culture were recalled and Big Local community workers John Kent and Teresa O’Keefe also detailed innovative local projects – including the Thurrock Soup and Youthink business idea initiatives for residents and students.

Warmly appreciated by attendees was the story of the success of the “Tribe by the Thames” youth group, which has been welcomed by parents in the area.

John Kent also briefed on the latest project which is about to come to fruition, the creation of Falconwood Pocket Park, an area of woodland at the junction of Bridge Road/Manorway and Argent Street which is about to become a community-owned area. The area has already been tidied up and some dangerous trees made safe. The paperwork on taking over ownership of the site is about to be completed and once the title has been transferred Big Local will be undertaking the rebuilding the wall with railings to secure the park at night.

A group of nearby residents are leading on the project and will be talking to the wider community about the possibilities of the pocket park once these works have been completed.

During the afternoon attendees took part in a workshop session to identify and prioritise needs in the Grays Riverside Community, which Big Local will consider going forward.

You can find out more about the work of the Big Local online at www.riversidecommunity.org.uk. 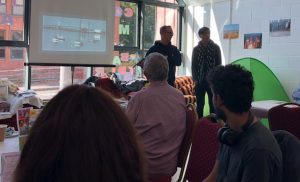