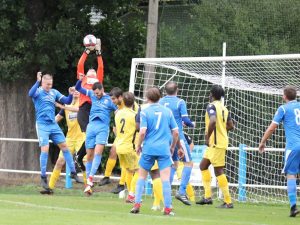 The latest round of ESL fixtures started on Friday evening as Barkingside welcomed Clapton to Circklefield. The host have found goals hard to come by this season and were trailing at the break by a Jay Morris goal. The Tons effectively won the game inside four minutes of the re-start as Ryan Reed struck twice in quick succession to hand Clapton a 3-0 away win which sees them up to third. Barkingside meanwhile slip to eighteenth.

Takeley started the day third and had an opportunity to wrestle the leadership of Hullbridge Sports. Luke Hornsley had other ideas of course, scoring the only goal of the game in the38th minute, while George Marsh and his defence kept a clean sheet at the other end. The 1-0 win keeps Hullbridge at the top of the table, while Takeley by the end of the afternoon found themselves dropping down to fourth. Ilford are up to second after registering an away win at St. Margaretsbury. Hugo Rosetti collected another clean sheet: that almost guarantees a point; but goals from Dan Haigh, Seye Okunlola and Callum Maltese made sure that the Foxes returned from their Hertfordshire excursion with the full quota of points.

Walthamstow are fifth after registering a 4-1 win over Sawbridgeworth Town and Stow could have won by an even bigger score line if it wasn’t for the heroics of Jarvis Monk who pulled off some fantastic saves. He was beaten by Billy Jones in the 18th minute, but a Joe Wright penalty levelled things up, but only for a mere three minutes as Jake Giddings fired Stow back into the lead and then a powerful free kick from Lee Flynn crashed five minutes before the break. Monk pulled off a string of good saves in the second period to deny Stow but a fourth was duly added in the 76th minute as James Peagram rifled home a penalty to complete the scoring. The Robins sit twelfth after this encounter. Stansted are sixth after a solitary goal from Callum Ibe was enough to secure all the points against West Essex. The Airportmen also kept a clean sheet, so accolades for Charlie Turner and his defence.

Tower Hamlets had a miserable afternoon as Catons Lane as the Bloods went on to beat the bottom-placed club 5-0. James Crane opened the scoring in the opening minute; Charlie Portway doubled the lead in the 20th minute and on the hour Spike Bell made it 3-0. Lewis Francis added further polish as he notched two further goals which sees the Bloods now in seventh. One place below them sit Enfield who also had a good afternoon in front of goal as they rifled six past lowly Leyton Athletic. Reece Barrett notched a hat-trick with Billy Haspinall, Ben Bradbury and Ayo Odukoya the other marksmen. Dwade James scored the Leyton consolation and they now sit seventeenth in the table.

Redbridge were the comeback kings last season and some of that returned on Saturday as they were trailing to two Nathan Dewberry goals inside the opening half an hour. Michael Ogboin pulled one back for the Motormen before half-time; then in the second period  the Motormen equalised  via Asher Modeste before Vinny Murphy completed the turnaround by rifling home in the 73rd minute. The 3-2 win sees Redbridge end the day in tenth spot, while Manor are down in fourteenth.  Hoddesdon Town beat Woodford Town 4-1 with a Ciaran Doherty brace, plus strikes from Connor Bolton and Courtney Clay provided the Hoddesdon goals, with Samir Ali supplying the Woodford consolation.