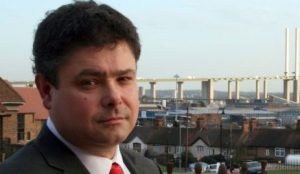 “THERE are times when I’m shocked by the absolute arrogance of the Conservative administration running Thurrock Council,” says opposition Labour Leader John Kent.

The most recent example happened on Tuesday, 18 September, when the council held their “secret” developers meeting at High House, Purfleet.

“As far as I know, no non-Conservative councillors were invited to the meeting. I know I wasn’t invited and I’m the leader of the main opposition group, a group with only three fewer members than the Tories.

“Our chief executive should be reminding Cllr Gledhill that the majority of people in Thurrock are represented by non-Tories. By excluding us, they’re excluding them too.

“The secrecy – local media was refused entry – is outrageous, but should be no surprise; remember the Elm Road open space and Blackshots sell offs!”

And Mr Kent added: “Another reason they were keeping it secret is probably because they were still talking about more than 30,000 new homes in the Local Plan – a plan that local councillors have not had a chance to discuss yet.

“Tories and top officers are well aware that we in Labour and other opposition councillors will not agree to their plans, but – in secret – they still use it to lure developers in.

“They’re not seeking to develop Thurrock for the good of those of us already here and those to come, they’re trying to sell it off from under our feet.