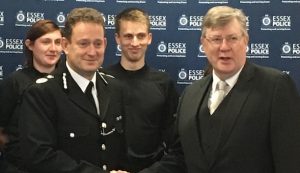 THE new Chief Constable of Essex Police has formally taken up the position today, Thursday, October 4.

Ben-Julian “BJ” Harrington, is the 13th officer to serve the county in its highest uniformed position. He swore the oath in front of Police, Fire and Crime Commissioner Roger Hirst, Assistant Chief Constable’s Andy Prophet and other officers and staff at a special ceremony at Police Headquarters in Chelmsford.

Speaking after the ceremony he said: “I am proud and privileged to be a police officer and especially honoured to be the thirteenth Chief Constable of Essex Police.

“There are well over five thousand officers, staff and specials working hard across our county to keep people safe, and our focus must be to protect the vulnerable, bring criminals to justice and work with our partners to solve the problems our communities face.

“We have a hugely positive future ahead of us and I can’t wait to get started.”

“The residents of Essex and the officers, staff and volunteers who make up Essex Police can be assured that Mr Harrington is an outstanding leader, cemented by more than 27 years of operational service both in Essex and the Metropolitan Police Service. I’m looking forward to working with him in the future as we work towards the vision for Essex that safe and secure communities are the bedrock on which we build success and wellbeing for all.”

Mr Harrington takes the reigns from Stephen Kavanagh who left the force on Tuesday, October 2, after serving four years five months as the Essex Chief and more than 33 years in total as a police officer.
To read more about Mr Harrington’s policing career visit our website: www.essex.police.uk/about-us/chief-officers/bj-harrington-chief-constable/