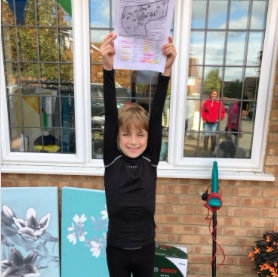 NOAH Goldsmith, 10, Diana Close in Chafford Hundred, has raised hundreds of pounds for two charities in his third year of fundraising.

The impressive youngster has raised over £1000 in the last three years for different charities but this year choose to support the local Mayor’s charity “Giving for Thurrock”.

The treasure hunt started at Noah’s home and included stops at 31 homes around the area. Each home had a different activity including; cake decorating, colouring and arts and crafts.

Maps for the treasure hunt were sold for £1 with all proceeds going to the local charity. With big charitable ambitions, Noah decided to double his efforts and sold raffle tickets with top prizes including swimming sessions, tennis lessons and vouchers with proceeds going to the Celia Hammond Animal Trust.

Asked whether he had a target he wanted to hit, Tudor Court Student, Noah explained: “I raised over £700 last year but I don’t think I’ll reach that this time. I’d be happy if we reached £500.”

The two-day treasure hunt has raised over £200 so far but he hopes more people will donate to do their bit.

Giving for Thurrock raises money which stays in Thurrock for Thurrock People. From the elderly to the youngest, grants are open now with details available online.

Mayor of Thurrock, Cllr Barbara Rice said: “Noah is clearly an incredible and inspiring individual who, even at his young age is spending his energy and efforts towards helping other people. I will be sending out a personal invitation for him and his mum, Poppi to come and have some tea. I think we could all learn something from Noah.”

If you’d like to help Noah reach his £500 target, you can make a donation directly visit thurrockcvs.org/giving-for-thurrock.