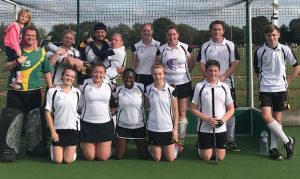 THURROCK started their new venture as a mixed team led by captain Fay Tuffee by visiting Upminster for their first league match. A positive move for the club with plenty of players turning out for the first match.

Thurrocks defenders Sarah White, Lisa Simmonds and Ricky Smith held out Upminster’s well drilled team with some great tackling and with the added pressure from Lou Pike kept the game goalless. With some powerful hit outs from White, Thurrock gained some ball time in the mid-field which gave Liam Ross and Sasa Naidoo a chance to attack and bring forwards Hayleigh Deex and Charlene Curtis into play.

Upminster were strong and passed the ball with ease, but despite some sensational saves by Thurrock keeper Andy Gaut, they finally found the back of the net.

Thurrock tried a different route up the pitch to avoid Upminster’s central strength by going wide with some great movement and runs from Callum Harvey and Ben Clark, being supported by Ryan Jones and Darren Clark which paid off and gave Thurrock some good chances to get a goal back, but Upminster’s team proved too strong and very quickly added to their goals.

Thurrock battled hard and showed great team spirit throughout this first match, even after suffering the loss of Pike due to a cut above the eye, but were beaten 4-0 by a very strong well drilled Upminster team. Despite the loss, Thurrock remain positive and look forward to their next match – Palmers college, 21st October, 12 o’clock start against Brentwood. We play our 2nd mixed game at Palmers College on 21 October.

This week we faced Colchester and following on from the last few weeks we were determined to keep a clean sheet to stay towards the top end of the table.

The first 15 minutes we struggled to get into the game with the poor weather not helping us. However we came together as a unit and worked up the field to create some great chances. Leah Purser who worked well in the Colchester d produced two goals. Following on we were able to play up the pitch where we had a few short corners awarded. With some well-choreographed plays Sally Ellis was able to turn around another two goals. Following on Katie Jacks played with some excellent skill finishing the game off 5-0. 1s play at Palmers next week 12.30 pushback v Wapping.

Thurrock produced a fabulous battling response from being two goals down to earn a well-deserved draw against Chelmsford in the early season top of the table clash at a rain-sodden Chelmer Park. Tees started the game brightly and had some early chances, but after a Chelmsford attack a harshly awarded penalty flick was confidently dispatched by the Chelmsford captain. Soon after, Thurrock were unfortunate to concede another goal after a scramble in the goal mouth. Tees continued to force attacks and just minutes before half time, after some good work from Fay Tuffee, Charlene Curtis finished cleverly with a reverse stick sweep over the goalkeeper. This goal gave Thurrock the impetus going into the second half and some great attacking runs by Emily Crown and Jade Franklin began to cause Chelmsford problems. At the other end the defence of Natalie Kerin, Lisa Simmonds, Cheryl Broadbent and goalkeeper Ali Hadley thwarted any Chelmsford attacks. After a strong, determined run down the wing by Franklin and some trickery in the D by Crown, Tees were awarded a penalty corner; good work from the resulting corner by Sasa Naidoo and Curtis enabled Sarah Judd to convert her chance perfectly on the post with just a minute left on the clock. Thurrock were delighted with the way in which they fought back to earn a pleasing draw against tough opposition to remain unbeaten this season. Joint Players of the Match were Emily Crown for her fantastic attacking runs and Lisa Simmonds for her immaculate defensive display. Tees face another difficult match next Saturday when they meet Wapping at Palmers.

Thurrock will look back in this game as a missed opportunity!

Old Loughtonians were without a goalkeeper and the ladies failed to capitalise on this. The game was played at a good pace and both teams had opportunities. GK Claire Brosnan had a fine game and made some impressive saves to keep the score at 0-0 for much of the first half. It took a breakaway move for Old Loughtonians to go ahead. This unsettled the ladies for a while but Sally Willett gave a resilient performance to calm her young team mates. Player of the match Millie George gave the opposition much to think about as she created some fine penetrating moves.

Resilience was seen immediately and the ladies pushed forward when Sally Willett sent a scorching pass into the goal area and Sophie Runcorn deftly placed the ball into the back of the net. This was unfortunately disallowed. A disappointing score line which now means 3 losses from 3 games. The ladies are determined to find their winning ways! The ladies produced a hardworking performance and one that should inspire them to ‘better results’.

For the first time for over a year, Thurrock had a complete team for this East Division 8SE game and pushed forward from the first whistle with forwards Henry Hudson and Martin Healy making a string of threatening runs forcing Colchester to defend in numbers. When Colchester managed to break up the pitch, the Thurrock defence of Hayden Keeler Stone and Jo Harvey marshalled by Dave Leeks were able to quick to turn it around and move the ball out to midfielders Ricky Smith and Ben Clark with tenacious tackling by Robert Healy ensured the upper hand. After 15 minutes, a rare breakaway appeared to be under control but an missed tackle and a cruel deflection off a defender’s stick led a Colchester goal from close range. Thurrock were spurred into action and Dave Leeks levelled after only 5 minutes from a short corner. Thurrock continued to see more of the ball with Smith being unlucky to see his goal bound shot go inches wide. In the final minute of the half a speculative shot by a Colchester attacker deflected off a defender’s stick caught keeper Ryan Jones off balance and the ball spun across the line. Colchester started the second half strongly and pushed Thurrock back which eventually led to their third goal from a short corner. Thurrock were not daunted and brought on substitute Jay Lamb to add to their threat and reclaim the upper hand and force Colchester to concede a series of penalty corners which eventually produced a goal by Michael Fleming. Thurrock battled hard to get the equaliser with man of the match Robert Healy making threatening runs on the wing the attackers forcing the keeper into a string of saves. In the last minute a clearance found Thurrock pushing too high and allowing a Colchester attack which broke Thurrock hearts with a goal.

After a fantastic start to their season, Thurrock began the day top of the league with high hopes of keeping it that way. With that in mind they put Witham under pressure from the off. A spell of slick passing eventually led to a short corner, and all the hard work at training paid off, as a well-rehearsed routine saw Steve Abbott find a way through the Witham defence. Another short corner soon after saw Abbott hit the post and Thurrock continued to pressure the Witham goal. The lead was extended when Ash Snell lobbed the encroaching keeper to give Thurrock a 2-0 lead going into half time. The second half started in torrential rain, but the weather didn’t distract Thurrock, who’s passing game was in full flow. A quick break down the right from Darren Clark, who found Liam Birch in acres of space up front, and he slipped the ball into the path of Abbott for his second of the game to make it 3-0. Abbott kindly returned the favour for Birch, squaring the ball across the front of the goal for Birch to get the 4th. Abbott completed his hat-trick late in the game from another short corner, this time a strike from the top of the ‘D’ to take his tally for the season to 10. Jordan Salmon was named man of the match after dominating the Thurrock defence, restricting Witham to only a handful of half chances.