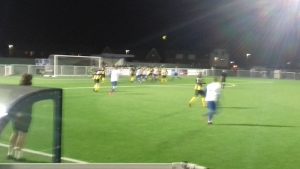 A Tom Richardson brace helped Aveley overcome Basildon United in a highly entertaining contest that served up some good football despite the prevailing strong winds that swept across Parkside.

The spectators barely had time to take to their seats before the Millers took the lead. Alex Akrofi took the ball into the Basildon box and squared it to Richardson, who audaciously back heeled the ball into the back of the net from inside the six-yard box: a mere 38 seconds played.

Connor Wheatley may have been beaten by a soft goal in the opening minute, but five minutes later he was showing nerves of steel as he claimed the ball off the on-rushing Richardson, which meant he required some treatment after making the brave save.

And the Millers continued their bombardment on the Basildon goal with a free kick that pinged around the Bees box, which saw an Aveley player getting upended in the box, which raised claims for a penalty which the referee ignored. Wheatley was soon afterwards showing further heroics as he claimed yet another ball off an Aveley player, this time smothering the ball at the feet of Andy Freeman. When David Hughes, the Aveley ‘keeper, was finally called into action he had to make an acrobatic save to catch Eljay Worrell’s free kick and then receive some treatment himself as he took a knock in the process of cutting out the shot.

It had been as lively a start as many were expecting, with Aveley playing some wonderful attacking football that was fast-paced and always played on the floor. It caused the Bees backline a constant problem, which they did well to swell, but when Sam Mvemba threaded a ball through to Richardson it was to be Wheatley who again had to get down low and snatch the ball before Richardson could get a shot off.

Basildon looked good on the counter-attack and had placed a few balls into the dangerzone, with Brian Moses using his tall frame to win balls in the air. However they didn’t really create too much, until the 23rd minute when Moses used his guile to hold off an Aveley player before setting up Eljay Worrell, who  rolled the ball past Hughes to drew the sides level.

Having now equalised, the Bees then started to come out of their shell a little bit; a decent cross from Connor Mead had to be claimed by Hughes, then a Fahad Quadri cross was scooped away by Connor Witherspoon; a timely clearance which took the ball away from the loitering Moses,  who would have had a golden opportunity at close range if the ball had made its way to him.

Aveley were able to test Wheatley once more before the break with Akrofi turning and letting fly, forcing Wheatley to dive high to palm away. Then a long range effort from Worrell was tipped away by Hughes, with the final chance of the half falling to the Bees, but Joe Burgess put too much height on his shot.

Moses started the second half in attack mode, bursting into the box on a few occasions, but found the Miller’s defence a solid unit and wasn’t able to do too much damage; he was able to get a header on target though, but Hughes cut that one out and it was soon to be his Basildon counterpart who was having to be on his toes; first tipping a Richardson effort around the post after some good approach play by Akrofi, then clawing a corner off the line, before denying Richardson again with a great dive to his right; then diving to his left  to deny Freeman. Wheatley had been asked a number of questions and had answered them all during this spell of Millers activitiy.

Basildon were able to stem Aveley’s flow, the swirling wind also played its part, but with twenty five minutes left to play it was definitely the Millers who were looking most likely to score. But Basildon had looked dangerous on the counter-attack and a deep cross from Jake Adlington was caught by Hughes whilst under pressure from Moses, resulting in the Aveley stopper having to once again receive some treatment.

Aveley were soon back on the attack as Freeman weaved in and out a number of Basildon players but could then only rifle his shot well over the frame. And a delightful weighted long pass by Harry Gibbs played in Richardson, with his dig being tipped around the post by Wheatley.

The Millers pressure finally paid off as they retook the lead in the 76th minute. A ball over the top reached Richardson who held the ball up, then whilst tussling for the ball with the keeper back heeled it, like he had for his first goal, into the net. Whether intended or not they all count: Aveley were now heading for Monday’s 1st Qualifying Round draw.

Akrofi flashed an Aveley effort just wide in the 80th minute and George Doyle curled a free kick wide, before Basildon had one final throw of the dice in stoppage time as Remi Nelson put his head on a cross, but Hughes pulled off one final save to make sure that Aveley won the game at the first time of asking, without having to go through a replay in midweek.

Aveley go into Monday’s FA Trophy draw, and then return to League business on Friday evening when they again face Basildon United in: this time the Bostik North’s top two teams will tussle for league points.