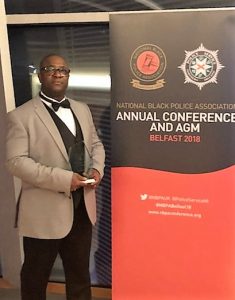 A Thurrock PCSO has won a national award for diversity, equality and inclusiveness.

MACDONALD (Mac) Neife, Chairman of the Minority and Ethnic Support Association (MESA), has won a national award for his work within the force and across the county in promoting equality, diversity and fairness.

The Police Staff Award at this year’s National Black Police Association was presented to Mac for his passion and dedication in driving positive change within the force by reaching out to, and engaging with, people from diverse backgrounds.

Mac champions the force as an inclusive organisation and has been heavily involved in Essex Police’s first diversity and inclusion campaign due to launch at the end of the year. The positive work of Mac and MESA is playing a key part in making our workforce more inclusive and breaking down any barriers which may exist between Essex Police and local communities.

Chief Constable BJ Harrington said, “Mac is an absolute star and I’m so proud that his work has been recognised on the national stage. Mac’s work supporting officers and staff from black, Asian and minority ethnic backgrounds and his advocacy in those communities in Essex for the police as a great career choice is exemplary. Like many other police forces we need to work harder and more effectively to address the under-representation of different communities in our county. The policing that works best brings together people from all sorts of different backgrounds, identities, and experiences to make communities safer. We will be launching a recruitment campaign on this issue later this year.”

Mac said: “It was an honour to be recognised by the association for my efforts, it goes to show how Essex Police is taking the lead in promoting equality, diversity and inclusiveness. This is about everybody within our organisation who are playing a very important part in making this happen. This award was a team effort, we won together as an organisation.”