THE Ginetta Junior Scholarship took place at Blyton Park, Ginetta’s own test track over the course of three days where the 15 year old, Brentwood based driver wowed the instructors. Brooks, who has never been behind the wheel of a car impressed Ginetta’s team of experienced drivers, across all disciplines and went on to beat 66 other aspiring drivers in what’s claimed to be one of the most sought-after prizes in UK motorsport. 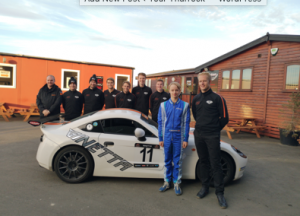 Securing a place on the 2019 Ginetta Junior Championship, Brooks earnt himself the use of a G40 Junior race car and entry into championship, along with insurance, consumables, tyres and fuel plus professional car preparation from an experienced team for the duration of the season.

Ethan Brooks, 2019 Ginetta Junior Scholar; “My two days at Blyton Park were extremely enjoyable and productive as I found my limits both mentally and physically. I learnt a lot from the expert driver coaching and also advice on how to present myself to the media.”

Ethan won the entry into the Scholarship as a prize from winning the BSKC (British Schools Karting Competition). The raw talent shone through the young driver across all three days as the track layout was changed from the qualification day to the final day and he showed his diversity and ability to adapt to the track straight away. Each qualification day saw 33 drivers participate before narrowing down to 24 drivers for the final day. From this, 12 drivers were then taken through to the afternoon before being whittled down to the top six drivers who battled it out, on a new track layout, to take the prize home.

All drivers were tested on their professionalism throughout media and fitness sessions. As part of the prize Ethan will receive a day of training at iZone and media training with renowned television presenter, Louise Goodman.

Mike Simpson, Ginetta Development Driver; “It was great to see the progression of Ethan’s driving throughout the Scholarship. The standard of drivers was particularly high which made judging a difficult task so changing the track layout over the days helped us to really see which drivers adapt.
Ethan is the perfect example of why we hold the Scholarship, his natural talent really showed through his driving sessions and his professionalism throughout his media and fitness session really did make a difference.”