By Staff Reporter on November 7, 20185 Comments 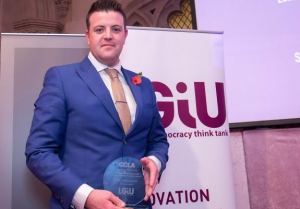 A THURROCK councillor has been lauded for his work on the borough council after landing a top administrative award.

Cllr Shane Hebb, who has represented the Stanford-le-Hope West ward since 2011, won the award for Finance and Transformation at the Local Government Information Unit and Churches, Charities and Local Authorities Councillor Achievement Awards ceremony held in London .

Cllr Hebb, 31, who is also deputy leader of the council, was praised at the Guildhall’s Livery Hall by judges made up of council leaders and chief executives who commended his ‘transformative effect’ on Thurrock Council’s finances.

Guests at the ceremony heard that since taking on the finance portfolio in 2016 he has “succeeded in alleviating a substantial deficit through adopting an ‘outside the box’ commercial approach that avoided salami slicing services and minimised the impact on residents.”

Judges also noted that Cllr Hebb, who is a senior manager of production operations at Tarmac Building Products at Linford and a director and owner of the Your Do It Yourself Centre in Corringham, had succeeded in taking on a challenging portfolio at a young age.

“Cllr Hebb has demonstrated huge talent and dedication. The outstanding quality of the nominations we received this year stands as a testament to the exceptional job many councillors are doing for their community.”