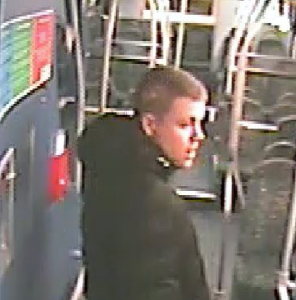 Do you know who this man is?

Officers investigating an incident where a replacement bus driver was subjected to verbal threats are looking to trace him in connection.

At approximately 5.30pm on 28 October, a bus driver was operating a replacement service between Pitsea and Chafford Hundred. Just after the bus departed Grays station, the bus driver was approached by a man asking him to pull over.

The driver informed the man the next stop was Chafford Hundred station, however the man became verbally abusive, threatening to kill the driver. He then grabbed the steering wheel three times.

The man then managed to open the doors and left the bus with a woman passenger.

Officers believe the man shown in this CCTV image may have information which could help them investigate.