THURROCK Council has revealed plans for the redevelopment of the Civic Centre in Grays.

The project is part of a larger regeneration scheme for South Grays and council documents say the new council building will “set the tone” for further development in the borough. 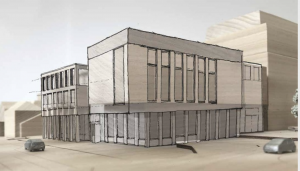 The plans detail a three-storey extension to the existing Civic Centre on New Road, which will house a new council chamber, confidential interview rooms and a café that will be available for use by the public and staff members.

The existing council building will be divided into two with one side being retained for council use and the other being converted into a residential area which could comprise of 120 flats.

It is estimated that the new development will cost £9.78million and most of this will be financed through a combination of money from the council’s capital budget, which had been allocated for refurbishment of the centre, and the expected income from the proposed flats.

However, they will still need to raise an extra £1.8million.

Councillor Oliver Gerrish, chair of the Corporate Overview and Scrutiny Committee, said: “I have some real concerns about the proposals which will be laid in front of the committee for discussion. It seems like a very large investment in the council offices at a time when the council are struggling to deliver services for residents.

“I have no doubt that my committee will be asking some very tough questions about these proposals and whether they are the right priority for Thurrock.”

Ward councillor Jane Pothecary was also cautious about supporting the plans, stating that the council needs to provide more information about how a new council building will benefit residents.

She said: “I’m a bit sceptical about the plans and I’m not entirely clear how they benefit the residents in Grays Riverside. This doesn’t generate a profit and it is going to cost a lot of money, so beyond it being a shiny new office and a new chamber I am unclear about the benefits.

“I think residents will ask why the council is spending a lot of money on refurbishing council offices, it is quite a difficult ask.”

The wider Grays regeneration scheme aims to give a boost to the area through the delivery of new homes, shops and restaurants, along with improvements to the railway station and the connections to the River Thames.

The new council building could become the home of many of Thurrock’s most important agencies.

A council report notes that several major organisations have expressed interest is moving into the new building to create a “multi-agency facility”.

Among those to express interest are Essex Police, Thurrock’s Clinical Commissioning Group, the Youth Offending Service, the National Fraud Service and a borough-wide CCTV control room.

The council report states: “Further work is being carried out to ensure the right service is located in the right place within the Civic and all will be subject to the final accommodation schedule. However, this represents an exciting opportunity to shape public service delivery going forward.”