Thurrock recorded a superb win in this top-of-the-table clash against visitors Colne. Tees started the game strongly and it didn’t take long for Alison Bonner to clinically finish a good team move. Thurrock were regularly creating opportunities both from open play and penalty corners and Becky McKenna slotted home a rebound from a penalty corner strike. Bonner then scored her second and undoubtedly the goal of the game when a marauding run by Sarah Judd finished with her reverse stick flicking the ball up and across goal and Bonner volleying it in.

Thurrock continued to threaten and McKenna scored her second, turning in another penalty corner strike, this time at the far post to ensure Tees took a commanding 4-0 lead into the half time break. The pattern of the game continued in the second half with Thurrock again pinning Colne into their end of the pitch and playing some excellent passing hockey. Fay Tuffee and Sasa Naidoo both created opportunities and were unlucky not to score. Colne’s second half resistance was finally broken when Bonner completed her hat-trick with a thunderous shot into the far corner and then netted her fourth and Thurrock’s sixth of the game.

Player of the match was Jade Franklin for her constant threat down the right wing with her strong attacking play which the Colne defence could not deal with. This result means that Thurrock remain unbeaten and top of the league, but without a game next week they will be hoping other results go in their favour to maintain this position heading into the following week’s home match against third place Crostyx.

A combination of injuries, holidays and illness meant that Thurrock Ladies 3s took on Crostyx 4s with only 10 players but they were determined not to let this stop them giving the 4th in the table team a great game.

Crostyx put the pressure on right from the off but Thurrock’s defence Jess Mager, Laura Nicola, Hayleigh Deex and Lucy Cowman at her new sweeper position held firm. It was only an error by Thurrock’s goalkeeper Claire Brosnan that broke the deadlock. Thurrock continued to battle hard but Crostyx skillfully used the extra player. The half time score 3-0.

The second half started the same as the first with Crostyx attacking and Thurrock keeping them out. Thurrock’s midfield of Millie George, Chloe Oakley, Charlotte Mailey and Sophie Runcorn kept pushing up and trying to get the ball to Isabel Crawford up front but just couldn’t get past Crostyx defence. After a couple of short corners were awarded against Thurrock, Crostyx scored again. Girl of the game was awarded to Sophie ‘Dave’ Runcorn. Final score 6-0.

Thurrock were ready and raring to go on Saturday for an early start at Palmers against East London. They started strong against a fast East London side and an early goal from Natalie Beardwell put Thurrock in a good position.

Our defence were strong but East London fought back and equalised shortly afterwards. With strong play on both sides of the pitch between Katie Lawrence, Joey Taylor, Natalie Beardwell and Louise Parrott Thurrock were able to capitalise and Gemma White found the back of the net to put Thurrock in the lead at half time. Throughout the second half, East London had several shots but were unable to get past goalie Kelly Bentley.

Thurrock’s third goal came from a short corner and Nikhol Chapman put them into the lead. A last minute short corner meant East London managed to close the gap. Another 3 points for Thurrock keeps them comfortably at 2nd in the table with a game in hand. They play next week away at Wapping.

With only 9 players, Thurrock found it hard against the team currently lying in third place of Division 8SE having only lost once. In the early stages it was Thurrock who dominated the game intercepting numerous Southend passes and quickly moving the ball up the field. However, with only one attacker, the keeper was rarely troubled. Southendians claimed the lead after 15 minutes from a short corner and added a second soon afterwards.

Thurrock continued to work hard but conceded a third on the stroke of half time. In the second half Thurrock gave their all with defenders Jake Lamb, Jay Lamb and Hayden Keeler Stone making many timely tackles whilst keeper Ryan Jones pulled off some amazing saves, to repel the onslaught, however lack of numbers eventually took its toll and Thurrock conceded five more goals to produce a score which Thurrock certainly did not deserve.

Thurrock’s men, still holding their heads high with the unbeaten streak, name, started this clash with some brilliant link up play between forwards Steven Abbott and Liam Ross. Abbott giving them the lead within the opening minutes with a well drilled shot past the advancing keeper.

Thurrock’s opening onslaught continued with both Liam Ross and Tony Cashman scoring in quick succession. Commanding the midfield, Jordan Salmon, who at one point forgot he was playing hockey, brilliantly weaved through the midfield to allow Abbott to finish the half with his second and Thurrock’s 4th. With the strong midfield protecting the defensive line, it gave Thurrock’s defence of Tommy Ing, Ricky Smith, Max Blake and goalkeeper Andy Gaut little to do.

Thurrock’s abundant strength showed in the second half, when some great simple hockey between Darren Clark, captain Tom Archer, Ash Snell and Callum Harvey made room for Ross and Abbott to slot in a further 6 goals. The game ended with Thurrock’s biggest win this campaign. Man of the match Ross scoring 5, Abbott finishing with 4 and Cashman with 1.

Next week Thurrock will play Clacton at Palmers.

Thurrock’s youngsters attended the latest Essex League fixtures of the season at Havering Hockey Club on Sunday morning. Thurrock join forces with Havering Hockey Club and all the teams played exceptionally well throughout the day, with good results across all age groups against a variety of teams from across Essex and London. 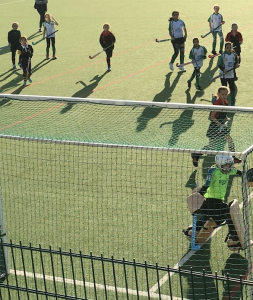 U10 Girls – Won 1, Lost 2; Eloise Naylor was again outstanding as Thurrock’s only player in this category.

U12 Boys – Won 1, Drew 2; Unbeaten on the day and without conceding a goal with Cameron Raisbury strong in defence.