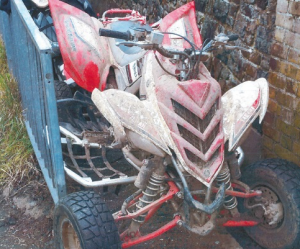 A quadbike rider who rode onto a footpath to avoid police and became wedged between a wall and a fence has been banned from driving.

Officers spotted the quadbike carrying a young child on the back in Woodgrange Drive, Southend, on April 2.

When the officers got near, it sped off with two mopeds and a motorbike. They followed them to Ambleside Drive, where the four bikes started riding along a footpath.

The motorbike rode off but the quad bike became wedged, trapping the two mopeds behind it.

The quadbike rider, David Godman, and one of the moped riders, Simon Willats, were arrested at the scene and later charged with dangerous driving. Willats was also charged with driving other than in accordance with a licence.

They pleaded guilty to the offences at Basildon Magistrates’ Court on Friday, December 7.

Godman, 36, of Bellmaine Avenue, Corringham, was banned from driving for 18 months and fined £460. He was also ordered to pay £300 costs and a £46 victim surcharge.

Investigating officer Detective Constable Mark Sawyer said: “They should not have been riding on the footpath and they posed a real danger to any pedestrians who might have been using it.

“This is especially the case as there was a high wall where the footpath turned a corner, blocking the view of anyone coming the other way.

“Added to that danger was that Godman was carrying a child pillion passenger on a quadbike that was only designed to carry a rider.

“Godman and Willats acted foolishly and dangerously, and have paid the price with driving bans and hefty fines and costs.”