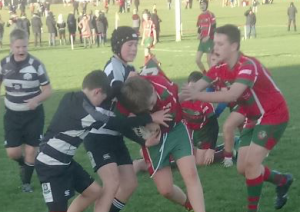 TEES U13 paid a visit on Sunday morning to the splendid new Harlow RFC grounds.

Whilst the tempestuous weather events of Saturday may have abated, neither of these u13 teams were in festive mood for peace and joy on Sunday morning.

Home side, Harlow attacked early and piled on the pressure inside the Thurrock 5 metre line and useful inside centre Owen Eylon went over for a Harlow try.

Tees Captain Jake Holding responded with a great individual try on five minutes to make the score 5 a-piece and now we had a game on.

Harlow upped the ante and Tees were pushed back and despite some stout defending, conceded another try to Harlow’s centre Owen Eylon for his brace.

Shortly afterwards, on 12 minutes, Harlow’s outside centre Henry Stovell scored the first his four tries and at 15-5 early on it looked like it was not going to be Thurrock’s day.

Cometh the hour, cometh the man and whilst Tees players all played their part, it was Captain Holding on 15 minutes who nipped in for his second try to make the score 10-15.

However, the second quarter was all Harlow, with what seemed like every decision, the bounce of the ball and more particularly young Henry Stovell. Stovell scored his second try and his pass released Harlow winger Joe Court to score in the corner to stretch the Harlow lead to 25-10 on the 25 minute mark.

Tees u13 were literally hanging in there, with Healy, Smedmor and Arowolo holding back a rampant Harlow forward pack. It is times like this when players like full back Milo Wilsher come into their own with the try saving tackle or that vital interception.

Tees were rewarded for persistence with a pre interval try as they patiently worked the ball out to speedster winger Mitchell Lilley and get that all important try making it 15-25 at half time.

All was not lost and Tees Coach Driscoll reorganised his charges. Two early second half wonder tries from Tees’ Lilley was testament to some great distribution along the back line from Fly half McAllister and the impressive Joseph Reynolds. Within five minutes of the restart the score was level at 25-25.

Harlow’s player of the day, Stovell at outside centre popped up again to make it 30-25 but a wonderful Healy and Reynolds surge saw Tees’ Sonny O’Brien go over to make the score all square again at 30 a piece.

Tees late arrival Abou Dikati was introduced into the fray, with not much time remaining. Dikati, Ducati, this boy Abou, with ball in hand is the Porsche Boxster of fast wingers. Working the ball along the backline, flyhalf McAllister finds Dikati and the rest is history as Dikati flies in for the equalising try 35-35.

The relentless toil and torment of Tees forwards in the field like Chapman and Healy was causing an absolute nuisance to Harlow players and the ball came lose again for that Lilley, Dikati combination to run in Tees winning try on the stroke of full time. Thurrock 40 Harlow 35″