TWO men have been jailed for their part in an attack that left a man with multiple stab injuries.

The 35-year-old victim had gone to Belhus Park in South Ockendon expecting to meet Michael Thompson to collect a mobile phone he had bought from him. 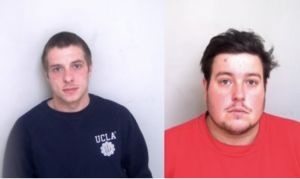 Thompson, 28, told him a friend also had a laptop and games console to sell to him.

But when the man arrived at the park, he was confronted by Thompson’s friend, Lewis Dodd, who pushed him to the ground, kicked him in the face repeatedly and stabbed him multiple times with a knife.

The victim fell unconscious and woke to find his jacket containing a mobile phone and a three-figure sum of cash had been stolen.

He had been stabbed in his legs and buttocks, and had fractures to his jaw, nose, cheeks and eye sockets.

Thompson, of Mill Lane, Grays, denied charges of wounding with intent to cause grievous bodily harm (GBH) and robbery and stood trial at Basildon Crown Court on November 7.

He was convicted by a jury of robbery on November 15 and found not guilty of GBH.

Dodd, 26, of West Street, Leytonstone, pleaded guilty to wounding with intent to cause grievous bodily harm and robbery at Basildon Crown Court at a hearing in May.

Both were sentenced at court today, Friday, December 21.

Thompson was jailed for six years.

Dodd was jailed for nine years and nine months for the GBH offence and six years for robbery, to run concurrently.

Detective Inspector David Browning said after the hearing: “The victim of this vicious attack can be given an element of closure, with two very violent individuals removed from the streets of Ockendon for several years.

“The victim of this very serious assault was badly injured and could have died.

“Hopefully the residents of Ockendon will now feel that little bit safer knowing these two are behind bars for a considerable time.”