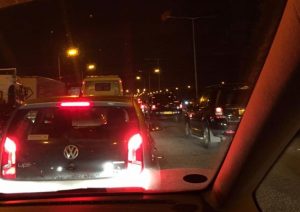 A GRAYS musician received a £100 penalty ticket after parking in a disabled bay at Lakeside.

Dorion Quest, aged 42, was one of thousands who were stuck in the major traffic gridlock on Monday night.

He told Essex Live that he was travelling with his two children (aged six and eight) and had already been stuck in the traffic for three hours after a visit to Smyths Toy Store in the retail park.

With the traffic in gridlock and his children needing the toilet, Mr Quest told the paper that he had to decide whether to use disabled bay or leave car in the middle of the road.

When they returned they had, accordion to Mr Quest been given a £100 fixed penalty notice.

Mr Quest has indicated that he is going to appeal.