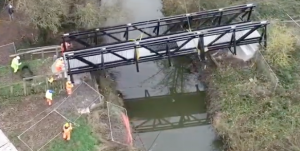 AN innovative new bridge which was installed at Davy Down Riverside Park, South Ockendon, on Friday is the first of its kind in Europe.

The new 16 metre long bridge was put in place across the Mardyke River on Friday. It is made of a plastic composite material which meant that the bridge was delivered in one piece and lowered into place on Friday 14 December.

The entire operation took place in just one day, far less than the weeks it usually takes to build a new bridge. It is the first bridge made with this material to be fitted anywhere in Europe.

The new bridge replaces the ageing wooden bridge which used to be at the same site near Pilgrims Lane, South Ockendon.

Cllr Aaron Watkins, Portfolio Holder for Environment, who was at the site when the bridge arrived, said: “Once again Thurrock Council is at the cutting edge using new technologies and innovative materials to create a long lasting new bridge which will continue to serve the people of Thurrock for many, many years to come.

“By taking advantage of the latest technologies we were able to fit a bridge in just a day, and with the minimum of fuss, to make sure that our residents were able to access the beautiful Davy Down Country Park with nearly no access problems caused by works.

“This bridge is not only innovative but will stand the test of time and be used by generations to come.”