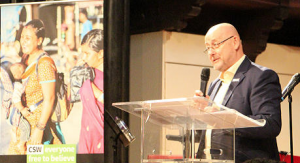 A MAN born and brought up in Grays has been recognised in the New Year Honours.

Mervyn Thomas, has been appointed a Companion of the Most Distinguished Order of St Michael and St George (C.M.G), in recognition of his services to human rights and freedom of religion or belief.

Following the publication of his appointment in the 2019 New Year Honours List, Mervyn Thomas said: “I am greatly honoured and deeply humbled to be recognised in this way.

Any success in my work for human rights and freedom of religion or belief has only been made possible by the outstanding talent and total commitment of all my colleagues at CSW. It is on their behalf that I accept this great honour, and also on behalf of the many thousands of courageous Christians and other religious minorities around the world who daily put their lives on the line for what they believe.”

CSW’s Honorary President Jonathan Aitken said: “Mervyn Thomas has been a brave and persistent fighter in the cause of human rights and freedom of religion or belief for all faiths for the past 40 years. He has been through ‘many dangers, toils and snares’ across the world’s continents when battling for this cause. He richly deserves this honour”.

Mervyn Thomas is Founder and Chief Executive of CSW, a Christian human rights organisation specialising in freedom of religion or belief. He has testified in the UK parliament and at Congressional hearings on Capitol Hill. Mervyn works closely with the UK All Parliamentary Group for International Freedom of Religion or Belief (APPG FoRB) and the International Panel of Parliamentarians for Freedom of Religion or Belief (IPPFoRB). He also advises the Foreign Secretary on freedom of religion or belief issues, as a member of his Human Rights Advisory Group.

Following the Foreign Secretary’s announcement on 26 December that he has ordered a review into the persecution of Christians globally, Mervyn Thomas added, “I very much look forward to contributing to the review, which will include recommendations for a cohesive and comprehensive policy response from Her Majesty’s Government.”

The charity Mervyn established 40 years ago has grown into an international organisation working to promote, protect and uphold freedom of religion or belief in over 20 countries, and which advocates at the United Nations, with the UK and US governments, the European Union and other regional and international bodies. CSW is the only advocacy organisation with UN accreditation which focuses solely on freedom of religion or belief for all.